The Bernardo Soto highway, the section of the Interamericana between the airport and San Ramón, was awarded the title of the most dangerous road in 2013. 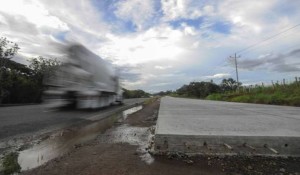 During this year, 23 people lost their lives on the 59 kilometre highway, according to statistics of the Policía de Transito (traffic police) and the Consejo de Seguridad Vial (COSEVI) – the roads safety council.

The figure is significant, especially considering that this highway is one of the most used by year end vacationers and visitors to Costa Rica.

Carelessness, speeding and bad weather are the three top causes of accidents and fatalities.

Following the Bernardo Soto in dangerous roads is the Interamericana Sur (Cartago to Perez Zeledon) with 19 deaths and the Ruta 32 (San José – Limón) with 18. All these figures are up and including December 14.

The total number of deaths on the roads, up to the second week in December, was 220.

Back to the Bernardo Soto. The road has a daily traffic volume of between 30.000 and 40.000 vehicles, this according to the Planning Department of the Ministerio de Obras Publicas y Transportes (MOPT).

A 7.1 kilometre portion of the road, between the airport and the Dos Pinos plant, has been under repair. Still to be finished are the drainage system.

The Bernardo Soto is also at the centre of the current controversy regarding the awarding of the concession contract to Brazilian contractor, OAS, that would have turned the Bernardo Soto. Bowing to public pressure, the government of Laura Chinchilla cancelled the concession and agreed to pay out US$35 million dollars in compensation. So far US$6 million has been paid, a court freezing all further payments.

As to the why the road is dangerous, besides the bad and careless driving, some sections of this important road have no lines painted, are poorly marked with road signs missing or vandalized and no lighting at night. Police patrols during the day are common, at night from little to none.

Germán Marín, director of the Policía de Tránsito, recommends drivers to use extreme caution when using the road, and be alert to avoid accidents.

Today, Thursday, June 17, vehicles with plates ending 7 & 8 CANNOT circulate The measure is countrywide and applied between 5:00 am and 9:00 pm,...
Business