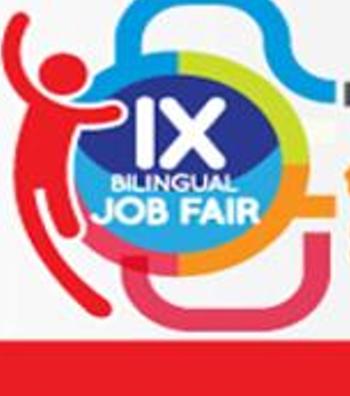 Despite the fear and warnings of layoffs and unemployment by the private business sector, the Coalición Costarricense de Iniciativas para el Desarrollo (CINDE) – Costa Rican Coalition for Development Initiatives – is sponsoring a job fair to fill 7.000 jobs.

According to CINDE’s Vanessa Gibson, some 60 companies, both national and internationals – are taking part in the job fair that kicks off today and run until Sunday (10h) at the Antigua Aduana building,in Barrio La California, in San José.

Entrance to the event is free to the public.  The fair will be open from 9 a.m. to 5 p.m. Friday and Saturday and on Sunday from 10 a.m. to 4 p.m. CVs in digital format will be accepted.

This is the Ninth edition of the Bilingual Job Fair promoted by CINDE, the agency in charge of attracting foreign direct investment.

According to Gabriela Llobet, Director General of CINDE “the companies participating in the CINDE Job Fair are the leaders in each of their sectors and have been growing to become part of the large employers of the country.   Likewise, companies that have recently decided to establish operations in Costa Rica also participate and therefore will be recruiting their first work team during the fair”.

One of the companies participating in this edition of CINDE Job Fair is CitiSharedServices that seeks to recruit personnel for its financial services center, which began operations in Costa Rica in 2008 and today it employs 800 individuals.

“Since establishing our shared services center five years ago, this operation has proven to be a real success story. One of the key factors has been the assistance and support provided by the employment fair organized by CINDE.  To date, hundreds of candidates have been contacted through this event, many of them have been hired and they perform excellently.  We are certain in the 2013 CINDE Job Fair we will continue to identify fine talent for our organization.  We are looking for personnel fluent in English and Portuguese” added Francisco Camargo, Director General of CitiSharedServices.

Mastering a second language is a cross cutting element in all the employment positions offered. Companies seek personnel with knowledge in English – in the first place – as well as in other languages such as Portuguese, Mandarin, German, Dutch, French and Japanese..

Yalile Quirós, Human Resources Manager of Volcano, stated the fair has demonstrated it has very successful opportunities for all the eligible candidates the market offers and for those who master a second language. “Our expectation is to identify these exceptional professionals who can join the team, mainly during the first half of 2013, as well as to generate contacts for those who remain pending for the second semester”, added the spokesperson.  Volcano established operations in the country one year ago and is dedicated to manufacturing medical devices for cardiovascular diagnosis and treatment.

The candidates must also have “soft skills”, among which leadership, negotiation, problem solving, team work, proactive and assertive communication are stressed.

For this year it is expected that more than eight thousand persons will visit the Fair.

QCOSTARICA - Six out of ten people in Costa...
Infrastructure