[BLOG] Get Out Of Your Comfort Zone and Buy Local

TICOBULL — Finding ways to save money on food costs in Costa Rica really isn’t that difficult, it’s more getting out of your comfort zone, visit the local markets and be adventurous. 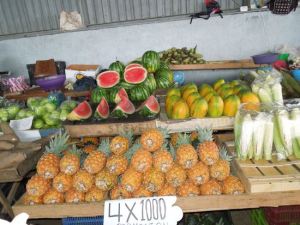 In my case, living in Rohrmoser, I have two plazas, with two supermarkets within a five to seven minute walking distance, justifying that it’s not worth the hassle of getting in getting my car or walking the 1.5 kilometres to visit the Pavas weekly fair.

Surfing the net for more information on Costa Rica’s costly food prices, came across this one by Paul on his “Retire for Less in Costa Rica … living in pura vida” blog, maybe by procrastination has to stop. Not a matter that I have to, I am thankful that Costa Rica has been good to me, but a matter of not being the “typical” foreigner.

The article that motivated me to make the change is  “Paul’s Monthly Tip to Live for Less in Costa Rica: Buy Local“. It’s a couple of years old (2010), but the advice still applies today.

Buy local and avoid stores like PriceSmart, AutoMercado, and other stores that carry expensive imported products and throw your food budget out of whack.

Before coming to Costa Rica, we were thrifty food shoppers, spending a little over $450 per month. Our food budget in Costa Rica is about $330 per month.  This savings can be attributed to more fruits and vegetables and buying locally. By that I mean, find the Costa Rican substitutes or equivalents for many of your favorite American foods and ingredients.  Sometimes the products are identical but the language barrier can stymie your search.

Gloria is writing a book covering just this area, with over 1000 categorized foods, cooking terms, and more, translated in English and Costa Rican Spanish. Here’s just a small sample of what’s in the book:

If you avoid the PriceSmarts of the world, your food expenditures will decrease significantly. Not that we don’t ever visit these stores. We still go several times a year, and spend less every time because we’ve found less expensive alternatives.  Where we once spent up to $200 per visit, we now spend $30.

I wasn’t able to find a link to the Gloria’s book. I have written to Paul, if the book is available and how to get it and will post as an update here.