Here is an interesting fact that has not been covered or commented on in the mainstream Spanish news outlets: Otto Guevara knew the outcome of Sunday’s election. And prepared himself, had the bases covered. 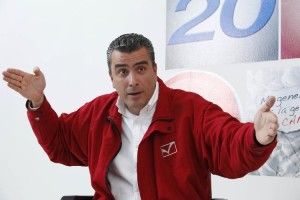 OK, he didn’t know who would win or tie or what. But HE did not HE would not win.

Of all the presidential candidates – 13 if you are counting – Otto was the only one to have his name on the “papeleta” (voting form) form for president and legislator.

By now everyone knows that his fourth try at the presidency was a bust, he even obtained less support than last time around. But he will still be influencing politics, as he continues with his legislative role.

His party only has 3 seats in the 57 member legislative chamber. Otto is one three Movimiento Libertario legislators. But, three may be enough to form policy, as the top three political parties look for alliances with smaller parties.

Let’s look at it. The Partio Liberacion Nacional (PLN) has 18 seats. The Partido Accion Cuidadana (PAC) has 13. The Frente Amplio has nine and the Partido Unidad Social Cristiana (PUSC) has eight.

None of these four parties have enough to hold a majority- 29 seats, so an alliance is necessary. And this is were Otto comes in.

Lets do some arithemtic.

The PLN needs 11 more seats to make a majority. The PAC needs 16. Where will they come from?

The Frente Amplio is out. I don’t anyone can see the “yellow and black” mix it up with the “green and white” or the “orange and red”.

It is likely a few of the PUSC  will align themselves with one or the other or both. There there are a few from the smaller parties and independents. And otto.

Otto has enough in one hand to be able to make some good backroom deal.

Like he said on Sunday, in his concession speech,  “Diocito (God) has different plans for him?”

Q TRENDS - A highway that will charge electric...
Fuel Prices