A call to 911 warning of a bomb in a gasoline station in the centre of Cartago had authorities scurrying Saturday night. 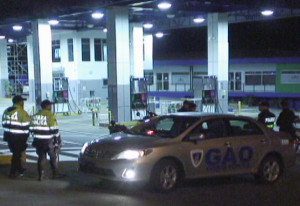 According to Carlos Villalobos of the Fuerza Publica (police), due to the call protocols were activated, that kept the gasoline station closed for more than three hours.

Customers and employees were removed quickly from the premises and bystanders kept a distance in the event of an explosion.

After a careful review, no explosive device was found. The call, apparently, was a hoax.

The small Central American country of Costa Rica is known to be one of the top locations to retire, but it is also known...
El Salvador

QCOSTARICA - Puntarenas is the only province in the country that has a contagion rate or "r" rate greater than 1. This is detailed in...
Photos of Costa Rica

QCOSTARICA - Do you need a certificate of the COVID-19 vaccines applied in Costa Rica?  People who require a certificate that certifies the receipt...
Guatemala