SOUTH AMERICA NEWS (InsightCrime) — In an operation that saw dozens arrested across four states, authorities in Brazil targeted a crime ring that allegedly provided aircraft to move cocaine from Venezuela to Honduras, supplying cartels in Mexico.

The hub of the criminal group’s operations was the city of Sinop, in Mato Grosso state. Arrests were also made in São Paulo, Minas Gerais, and Amazonas, and some $5.3 million in cash was seized, along with nine aircraft.

News outlet G1 reported that the crime ring purchased aircraft in Brazil and then modified them on a farm outside of Sinop, changing the planes’ identification codes and creating hidden compartments where drug shipments could be stored. The aircraft would then fly up to a ton of cocaine each month from the Venezuelan state of Apure to Honduras, where traffickers would abandon the plane and then take a commercial flight back to Brazil, reported EFE. 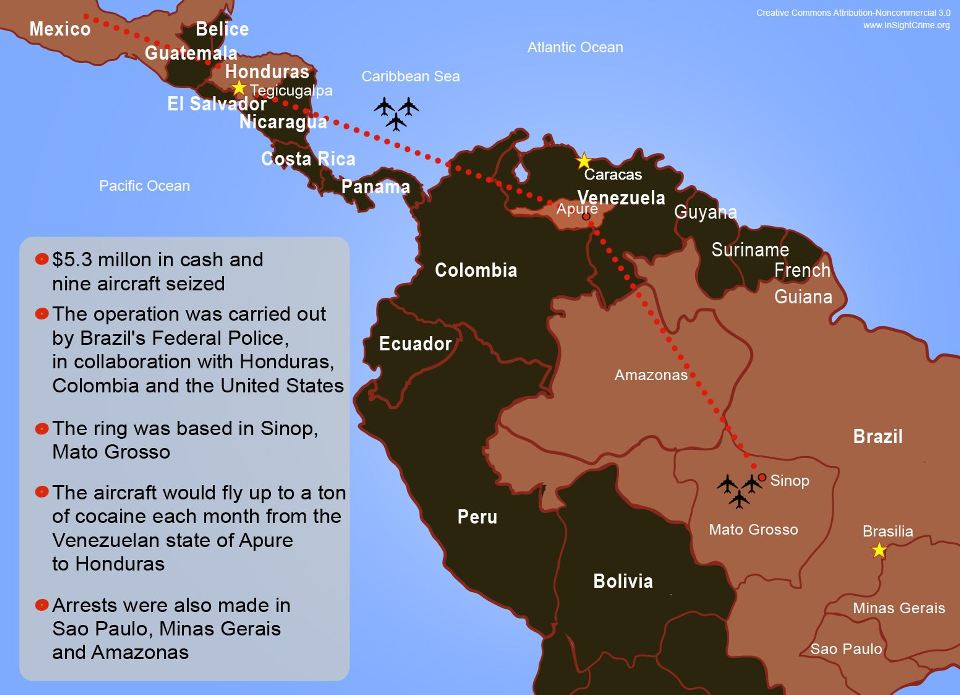 The US Drug Enforcement Administration (DEA), Colombian and Honduran authorities provided support for the investigation, which began in 2011, reported EFE.

Brazil is a major producer of aircraft — company Embraer is among the top three largest manufacturers in the world — which probably made it easier for drug traffickers to acquire aircraft there cheaply and without calling too much attention to themselves.

The Venezuela-Honduras route that the traffickers allegedly relied on is an air bridge frequently used to move cocaine to Central America. The Venezuelan border state of Apure, in particular, is a busy transit area for aircraft smuggling cocaine overseas, with traffickers rebuilding air strips almost as fast as authorities can destroy them. The guerrillas of the Revolutionary Armed Forces of Colombia (FARC) are thought to control much of the region’s drug trade.

Honduras, meanwhile, is an important landing area for aerially trafficked cocaine shipments, although US and Honduran officials have claimed that illegal flights have recently gone down by 80 percent. In an effort to combat the problem, earlier this year Honduras approved a law that would allow authorities to shoot down suspected drug flights, although this move proved controversial, and prompted the United States to stop sharing intelligence from anti-narcotics radars with the Hondurans.

QCOSTARICA - If it is proven in a final judgment that they did pay bribes to Conavi officials, several companies could be disqualified from...
Peru