A 12-year-old girl and her stepfather died in the crash, her mother in critical condition and 27 people on the bus injured in the Friday afternoon crash 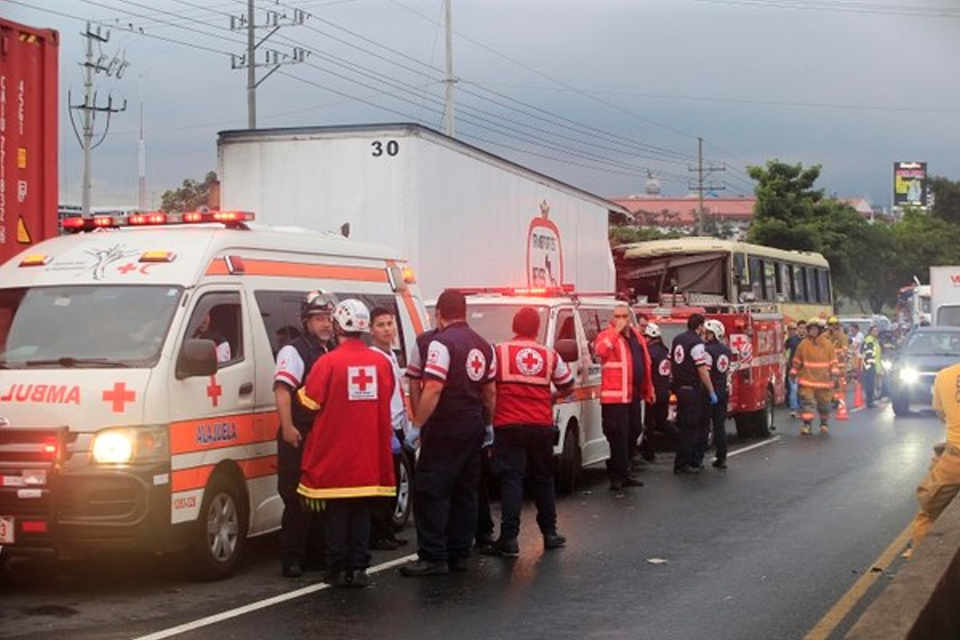 The country was moved on Friday afternoon to hear the news of the multiple crash that left a 13-year-old girl and her stepfather dead on the Autopista General Cañas.

In La Ribera de Belén, in the Alajuela – San Jose direction, a bus traveling in the center lane moved to the right lane, forcing a Honda Civic sedan into the ditch and slamming into one of the two stopped tractor trailers, lining up to the San Antonio de Belen exit.

27 passengers on the bus were injured, mostly with cuts and bruises,  several with serious injuries and requiring hospitalization.

Gómez, 41, had to be pulled from the tangled metal with the jaws of life.

When José Oreamuno, father of 34-year-old José Adrián Oreamuno, heard about the crash, the first thing he thought was: “One more family in disgrace and at Christmas.”

“Without even knowing that it was us, our family,” Oreamuno, told La Nacion on Saturday, while the family waited to receive the body of his son, to

The elder Oreamuno said he did not know that his son, a mechanic, had left work to attend his stepdaughter’s sixth-grade graduation.

Given the alleged imprudence of the bus driver that caused the crash, Oreamuno asked drivers for “a little more culture in the driving, a little more respect so that no family touches them, because it is difficult, it is horrible”.

Including Friday’s crash, the Policia de Transito (Traffic Police) report 420 deaths on the road, 25 this month so far. The numbers are only for deaths at the scene.

Jenny’s sister, Denia Gómez, said that “we have to give it time because everything is very recent. Right now it depends on time, how it evolves, it is very serious.”

Jenny Gómez is a teacher at Quebradas School, in Tambor de Alajuela, the same school her daughter graduated from this Friday, hours before the tragedy.

“She was my niece. I saw her being born, I saw her grow up, ‘la negra’ that’s what we called her,” said Denia Gómez.

- Advertisement -
Paying the bills
Previous articleFour men could have been involved in murder of tourist in Costa Rica, not just the security guard
Next articleAnother Senseless Tragedy: Mother And Son Die in Crash