COSTA RICA NEWS – 31 persons were injured in a collision between a semi truck-trailer and a bus in Huacas de Santa Cruz, Guanacaste, Saturday morning around 6:30am. The injured passengers of the bus were taken to clinics in Filaldefia, Santa Cruz and Nicoya for treatment. 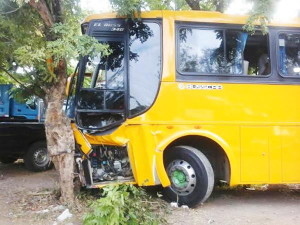 The bus was carrying employees of the Hotel Westin, Playa Conchal (between the beaches of Tamarindo and Flamingo) on their way to work, when the bus collided with the trailer, bounced off and continued some metres where it hit a tree on the side of the road.

The driver of the truck told La Nacion that a helper had signaled the bus to slow down as he tried to park the truck at the entrance at the Ferrateria Cemaco, however, the bus driver did not heed the signal and slammed into the truck.

Salas added that it appeared the driver of the bus did not appear to have braked.

The bus was carrying 64 people.

The majority of the injured suffered cuts and bruises. Two of the women were pregnant.

The Policia de Tránsito is investigating.