Canadian transnational Infinito Gold is once again threatening Costa Rica, after the court rejected its appeal against the government’s decision to close its concession granted to the company to exploit an opencast gold mine. 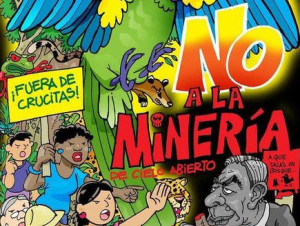 The spokeswoman for the Costa Rican branch of Infinito industries, Joquebec Soto, told reporters to posses “a revealing document” about the license granted by the government to the company, to explore in the land.

She launched a harsh attack against the country’s judiciary authorities, stating that “it is not possible to say one thing one day and another the next, there is no legal certainty here.”

Costa Rica’s Constitutional Court rejected yesterday the appeal filed by Infinito, in a last attempt to seek legal solution to the agreement closure.

Last April, the country’s president, Laura Chinchilla, said the case was closed after Justice issued a ruling in behalf of nearby communities, who felt aggrieved.

Meanwhile, the transnational did then an ultimatum to the government and set a deadline of six months to solve the problem.

RICO's DIGEST - We've all had this happen, your computer's hard drive is full and your computer crashes. But we are not the Radiográfica...
Economic Recovery