Castro chides US before flag raising 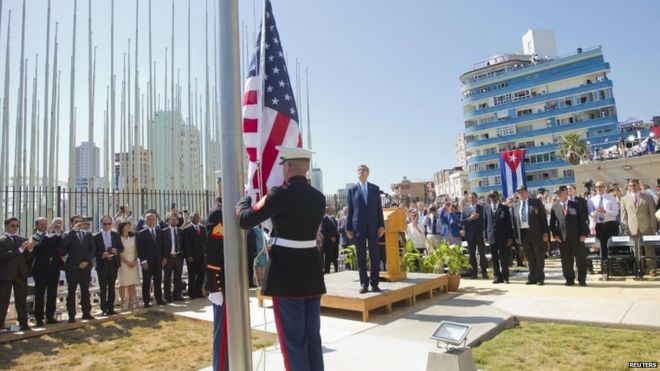 TODAY CUBA – The US has reopened its embassy in Cuba more than 54 years after it was closed, in a symbolic step signalling the warming of ties between both countries.

John Kerry, the first US Secretary of State to visit Cuba in 70 years, presided over the ceremony in Havana.

The US flag was presented by the same US marines who brought it down in 1961.

Cuba reopened its embassy in Washington last month. But issues remain, with Cuban leader Fidel Castro blasting the US for not lifting its trade embargo.

In an open letter on Thursday, Mr Castro said the US owed Cuba millions of dollars because of its 53-year-long embargo. The letter makes no mention of the reopening of the US embassy.

Mr Kerry described the hoisting of the flag as a “historic moment” speaking during the ceremony on Friday.

But he also warned that the US would not stop pressing for political change in Cuba.
“The people of Cuba would be best served by a genuine democracy, where people are free to choose their leaders,” he told a crowd of hundreds gathered outside the embassy building.