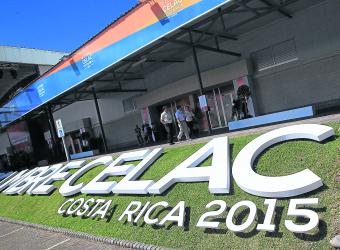 San Antonio de Belén,  Costa Rica – The Community of Latin American and Caribbean States (CELAC) is a space in which the political integration of our region, goes from rethroric to practice, said Costa Rican Foreign Affairs Minister Manuel Gonzalez Tuesday.

“This is a young and dynamic mechanism, which has given multiple fruits in its short existence, it has contributed to an open and sincere dialogue among its own members,” said when inaugurating the meeting for the CELAC Foreign Affairs Ministers.

Gonzalez assured that since CELC was created in Caracas in 2011, Latin Americans and Caribbeans have a space “to talk to each other with confidence, talk about common problems and share positive experiences.”

He stressed the significance that for a small country like Costa Rica, was to preside the mechanism temporarily mechanism and organize the meeting to go to the history as the highest level event held in their territory, the Third Summit of Heads of State and Government.

He acknowledged that despite the challenges, assumed that commitment, clear the opportunity represented to be the unified voice of this region to the world.

“The CELAC and the member countries forming it will dream of greatness and will not surrender, regardless of our geographical or economic conditions, our aspirations to improve the quality of life of the people we represent,” he said.

He explained that Costa Rica convoked and orgainize the summit convened under the slogan “Building Together” to address the fight against poverty and corruption, with a focus on transparency.

“In this context, discussions that will begin tomorrow will show us the way forward,” he said.

Gonzalez said that during the meeting on Tuesday, the foreign ministers will enlist the Political Declaration and the Plan of Action and twenty Special Statements to be analyzed by the Heads of State and Government.

“We will validate documents worked out by the National Coordinators and their teams for the past two days, from a busy agenda they developed throughout the year.

This process, although concluded Monday, began several months ago and has meant a great job of negotiation and consensus among the 33 countries, building together this community, he said.