The trend for carbonated and alcoholic products, known as hard seltzer, began in 2013. In Costa Rica, Fifco already markets a brand 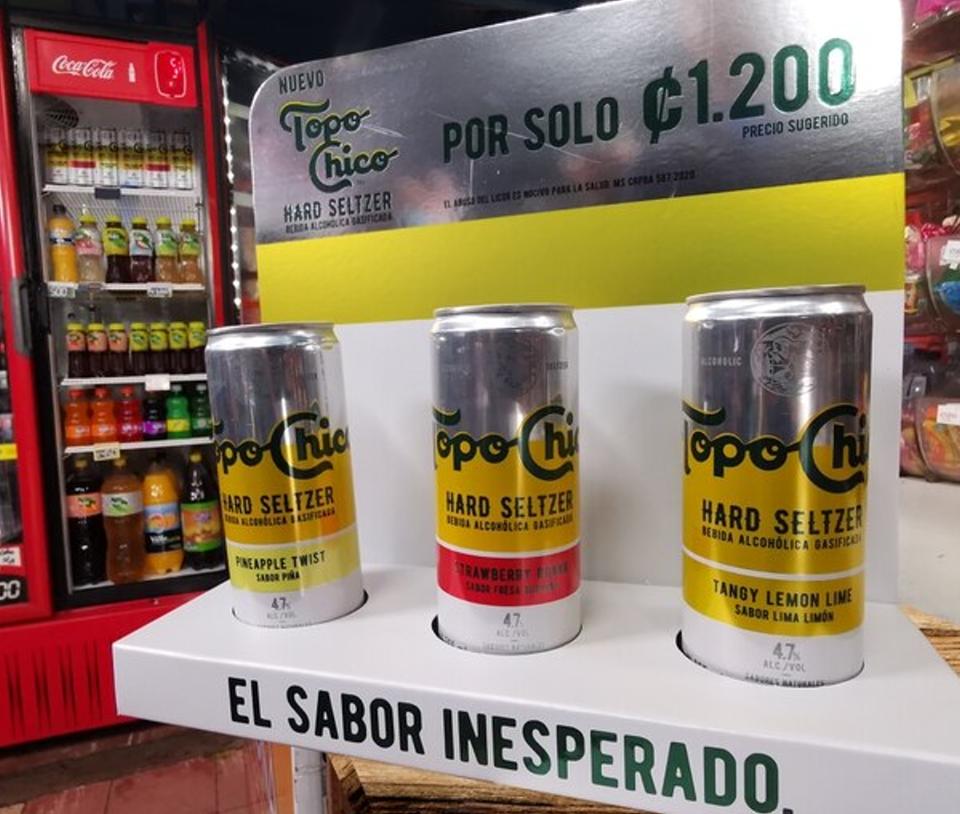 QCOSTARICA – Business challenges come for everyone: seeking to diversify its market, Coca-Cola entered the hard seltzer segment, and for the first time will produce and market alcoholic beverages.

William Segura, Manager of Public Affairs and Communications for Coca-Cola in Central America commented that for now, its product Topo Chico Hard Seltzer will be imported from Mexico.

In the future, the company say there is a possibility that it will be produced locally.

Coca-Cola’s product is in direct competition in Costa Rica with Adán & Eva, launched in 2019 by the Florida Ice, Farm & Co (Fifco), the beverage company that includes the cerverceria (brewery), water, juices, and bottler of Pepsi products, among others.

In the US the category was born in 2013, made by fermenting cane sugar; sometimes malted barley is used and in these seven years it has caused the birth of specialized companies and has also recruited some of the main producers of alcoholic beverages in the world, such as Miller Coors, with its Henry’s brand; Diageo, with Smirnoff Seltzer; AB InBev, with Bon & Viv and Bud Light Seltzer, or Constellations Brands, with Corona Seltzer.

The market leaders in the United States, the main consumer of these products, are Truly (from Boston Beer Company) and White Claw (from Mark Anthony Brands). They all range between 4% and 7% alcohol, and are around 100 calories.

Nielsen data, cited by Coca-Cola, found that in the United States the number of consumers of carbonated beverages with alcoholic content increased by 73% during 2019; that is, about 7.5 million people in that country. The category reached sales of $2.7 billion.

And its success goes hand in hand with other trends. The age groups known as millennials and centennials, all under 40 years of age, favor products with low calories, free of allergenic ingredients (such as gluten) or preservatives, and with lower amounts of alcohol.

Hard seltzers comply with offering a product with a lower caloric content and with other peculiarities, such as being suitable for a gluten-free diet, although their alcoholic content is similar to that of the most popular beers.

For example, while an Imperial beer (Fifco) has 4.5% alcohol, Topo Chico has 4.7%. An Adán & Eva and an Imperial Ultra share 4% alcohol content.

The growing trend for hard seltzers comes amid less favorable conditions for soft drinks and spirits, which intensified this year due to the pandemic and the closure of traditional channels for their consumption, such as restaurants and bars.

Euromonitor International data for store channels such as supermarkets (purchase for later consumption) and restaurants or food outlets (purchase for consumption on site), show that the country experienced a contraction of 20.4% in sales of carbonated or soft drinks between 2015 and 2020, and although recovery is expected for 2021, the projection is lower than what was recorded in 2015.

QCOSTARICA The Bishops of the Episcopal Conference of Costa...
Front Page