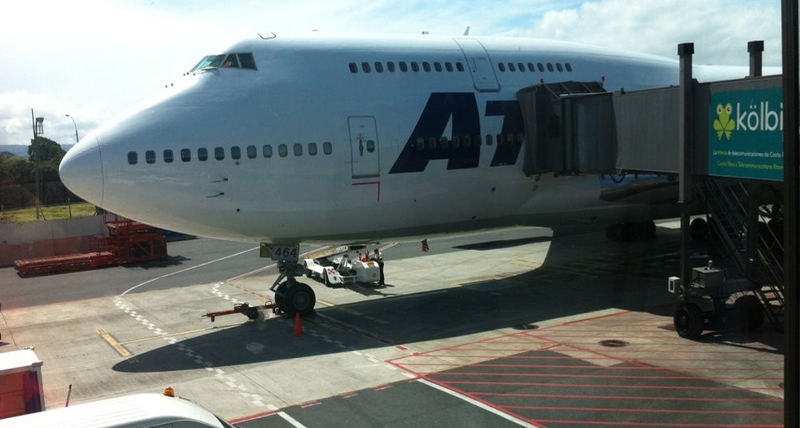 A Boeing 747 loaded with Costa Rican fans headed for Brazil was delayed for more than two hours this morning. When it finally took off, it did with one less of the 500 fans that paid between US$7.000 and US$10.000 dollars for the trip.

According to Mauricio Cortés, manager of Destinos TV, the organizer of the charter, the 11am flight operated by Atlas Air was delayed as immigration officials located the luggage of one its passengers.

Heidy Bonilla, spokesperson for Migración (immigration service),said the flight was delayed for two reasons: one, there was an error in the flight coding and second, an official found a man, identified only by his last name, Acuña, to have an “impedimento de salida” (legal restriction* on leaving Costa Rica).

Bonilla did not elaborate on the details of the impedimento.

The charter flight headed for Fortaleza, Brazil, where the national team will play its first World Cup game, against Uruguay, on Saturday.

*Legal restrictions for leaving Costa Rica can include court orders not to leave the country while awaiting a trial or sentencing, but the majority are usually due to some family matter, lik owing family support (pensiones alimenticias)

QCOSTARICA - It is reasonable to believe the major...
Politics