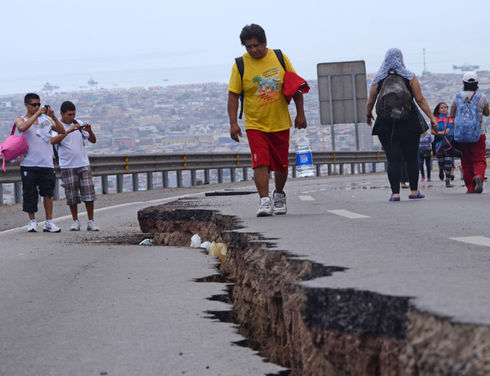 The earthquake on April 2 was part of more than 200 aftershocks, forcing the government to reissue a tsunami alert for three hours to residents along the coast. No new deaths were reported after six died on April 1.

Chilean President Michele Bachelet was in Arica, which was evacuated after being one of the cities hardest hit by seismic activity.

“We are following the indications like any other resident,” Bachelet said after evacuating her hotel with her staff and heading to a safer area. “I see that people are calm and prepared [for these kinds of events].”

The area, which includes the northern cities of Arica and Iquique, has recorded more than 400 earthquakes from March 16 to April 1.

Right after the April 1 earthquake, Bachelet traveled to Iquique and hailed the government’s response, claiming authorities faced “this titanic [endeavor] of responding to an earthquake and tsunami in an exemplary manner.”

“We are here to learn the difficult situation Chileans have faced since March 16,” Bachelet said on April 2 from Iquique, where she surveyed the damage and coordinated officials’ responses. “The government will support them. We also recognize the character that Ariqueños and Iquiqueños showed the country [after the earthquake]. They have given us an example.”

One hundred twenty-two residences were damaged in Iquique, where thousands of residents spent the night in the Tierra de Campeones stadium and received assistance from authorities, officials said.

Thirty percent of the Iquique Regional Hospital sustained damage, with several surgery rooms the hardest hit, according to the Health Ministry. The government said the Army will install a mobile field hospital to provide medical assistance to residents.

Between 70% and 80% of all fishing boats in the Riquelme fishing cove in northern Iquique were destroyed or severely damaged, according to fishing industry spokespersons. A crane is being used to retrieve sunken boats.

Economy Minister Luis Felipe Céspedes said the government will assist the fishermen who lost their livelihoods.

Several world figures reacted to the news of the quake.

“[I’m] deeply distressed at the news of the earthquake that caused fatalities and injuries, and substantial property damage and displaced in this beloved country,” Pope Francis wrote in a letter addressed to Chilean Cardinal Ricardo Ezzatti. “I wish to extend to all Chileans my closeness and affection.”

“We stand with our Chilean partners in the aftermath of the earthquake, and extend our sympathies and condolences to the families and loved ones of those who lost their lives,” U.S. National Security Council spokesman Jonathan Lalley said in an email to the Military Times website. “The United States stands ready to help. We have long partnered with Chileans on disaster preparedness and response. Our disaster experts in Chile have been and will remain in close touch with Chilean authorities.”

“The effective disaster response and preparedness strategies of the Chilean government and its [disaster relief agency ONEMI] are vital to the safety and well-being of everyone living in a country which is so vulnerable to earthquakes and tsunamis,” she said. “We saw the tragic loss of life which occurred from similar but more deadly events in 2010 and it is very encouraging to see that effective measures have been put in place since then.”

“There are situations that can be resolved today and others that will require more time,” she said.

NYTimes  (MEXICO CITY) - As soon as the nurse...
Redaqted