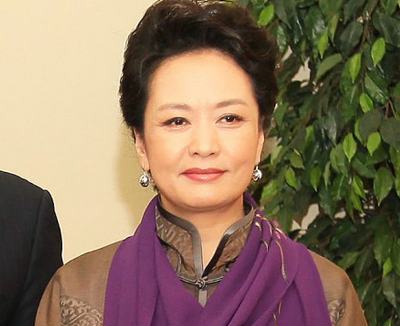 Peng Liyuan was already a celebrity when she became first lady of China, in March. For over two decades, this soprano enchanted her countrymen as a People’s Liberation Army (PLA) folk singer.

Today, this 50 year old woman captures looks inside and outside their country.

Peng Liyuan holds the position of “general division” of the Chinese army.

Peng was at her husband’s side Sunday night when she stepped off the Chinese presidential plane at the Juan Santamaría airport. Holding hands, the President and the First Lady waved to the awaiting Costa Rican and Chinese delegation.

During her Costa Rica visit, Peng Liyuan will be visiting the Hospital Nacional de Niños (Chidlren’s hospital) in San José.

Peng Liyuan is the daughter of a veteran communist who fought alongside Mao Tse Tung, at the age of 18 becoming a member of the People’s Liberation Army as just another soldier, but her talent led her to sing in many military bands.

Like her father, China’s First Lady dedicated herself to singing in the army and achieve unprecedented success. So much that in 2009, where her husband was appointed vice-president, she decided to abandon her artistic life so as not to overshadow him.

Before becomin president, Xi Jinping, was popularly known as “the husband of Peng Liyuan”.