Chinchilla Dedicated Her Visit to Celebrate, Not Mentioning Politics 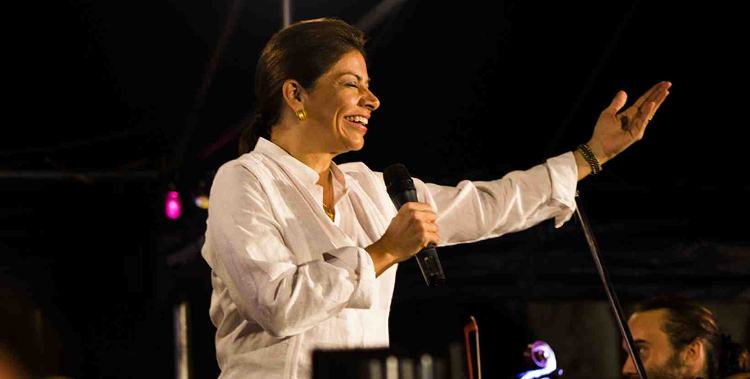 By Cynthia González, Vozdeguanacaste.com –  After a delay of 45 minutes, the President of the Republic, Laura Chinchilla Miranda, arrived at the civic events of the celebration of the 189th anniversary of the Annexation of Nicoya. This was her last appearance in Guanacaste during her period of government, which ends in May next year.

A day before the event, Mayor Marco Jimenez announced the change to the agenda of annexation activities agreed on in the City Council, moving the protocol events to the afternoon to avoid having President Chinchilla be met with a wave of more than 800 demonstrators from various groups, who were present on the morning of July 25, marching through the streets of Nicoya with banners and flags and thronging the colonial square of Recaredo Briceño Park.

After the sudden change of schedule, the cultural events were initiated at 5 p.m. by the Minister of Culture, Manuel Obregon, accompanied by the Orchestra of the National Music School (SINEM) of Nicoya and the Municipal Symphonic Band, playing themes  characteristic of Guanacaste folklore and attracting the attention of the public, who drew close to the stage.

Marco Jimenez shared a few words on stage, devoting time to validating the actions of the protesters in the morning on the grounds of being “indisputably valid demands.” Without reverting to giving his full support to their actions, he recalled the promises made by the government in the past to pave the roads leading to the various communities surrounding Nicoya.

For his part, Luis Antonio Aiza, legislator for Guanacaste from the National Liberation Party, was responsible for giving the government accountability report to those present, leaving the space open for Chinchilla to enjoy the celebrations without going into further political details.

The activity presented no setback, and the event ended with a traditional dance improvised by Chinchilla, Aiza and Jimenez, amidst the applause of those present who bid farewell to the president in her last visit to Nicoyan lands.

QCOSTARICA - Starting this Friday, and for 10 days,...
Rico's Digest