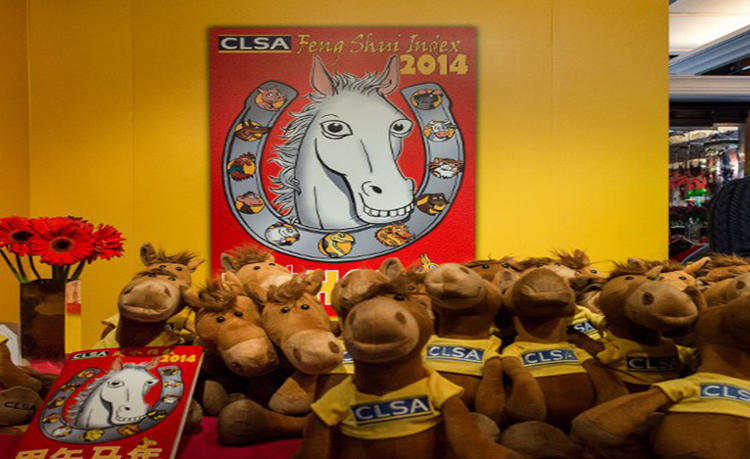 After the snake in 2013, this Chinese New Year ushers in the year of the wood horse in Chinese astrology.

It will be a fast year full of conflicts according to some astrologers, who see wood as providing fuel for the energetic horse sign. The later part of the year is “yin fire”, increasing the potential for heated clashes even more.

Feng shui practitioner Raymond Lo told Reuters: “The upcoming Horse year is also a ‘yang wood’ year, when people will stick more to their principles and stand firm. So it is hard to negotiate or compromise as there are more tendencies for people to fight for their ideals.”

If you have a business involving wood or fire you will do well, according to Canadian Feng Shui expert Paul Ng. This includes lumber companies, agriculture and media companies. Property companies won’t do as well and as the horse is a galloper, the potential is for the prices to gallop downwards over the first six months. However, supported by the fire element in the latter half of the year they may gallop back up, according to Lynn Yap, Singapore’s Feng Shui Queen. Metals and waters will do badly: this will affect metal mining and precious metals as well as fishing. Financial business also have the potential to be unstable. We could have predicted that one though.

Countries in the Southern Hemisphere, like South Australia and South America may experience gunfire as well as volcanoes, because “ the fire energies are so strong” according to Chinese astrologer and Sydney Feng Shui master Lok Tin, who spoke to the Sydney Morning Herald about his predictions for the coming 12 months.

When horse meets horse, the natural Ying-Yang opposition is no longer balanced and thus over the next year horses are due some tense situations and pressure in their personal life. However Foon Chik, of the Feng Shui Society says it is not that simple and meeting your own sign can be a time for self-reflection.

“This horse is like a stallion that has not been ridden yet,” he said. “It doesn’t want to be ridden, so the first six months [of this year] will be very volatile.”

He pointed out that the volatility in the business and economic spheres would be most pronounced in the first three months of the Year of the Wooden Horse, but would likely start to stabilize by May.

According to Tan’s explanation of Chinese astrological tradition, the world goes through a three-year cycle that determines which hemisphere is more—or less—auspicious at any given period. “For 2011 to 2013, the northeast and northwest [parts of the world] were the best [in luck],” he said. “But for this year, it’s southwest and southeast.”

People born in the Year of the Horse are strong minded, energetic and very sociable. Because it is a wood horse year, natives of the Year of the Horse will have even more energy and their year will gallop along. Horses should watch out for their temper towards the end of the year, though, as they can easily get het up.

Wood horses work hard and are good decision makers. They are great at socialising and are capable of having a large circle of friends, but sometimes talk too much.

Decorate your house in red to bring good fortune, with bowls of mandarins to bring happiness.

Chinese New Year lasts two weeks and is traditionally a time to honour ancestors and Chinese gods. The centuries-old celebrations end with the Lantern Festival on the 15th day of the New Year.

QCOSTARICA - A Costa Rican tried to enter the country through the Juan Santamaría International - San Jose Airport - with US$153,244 (the equivalent...
News