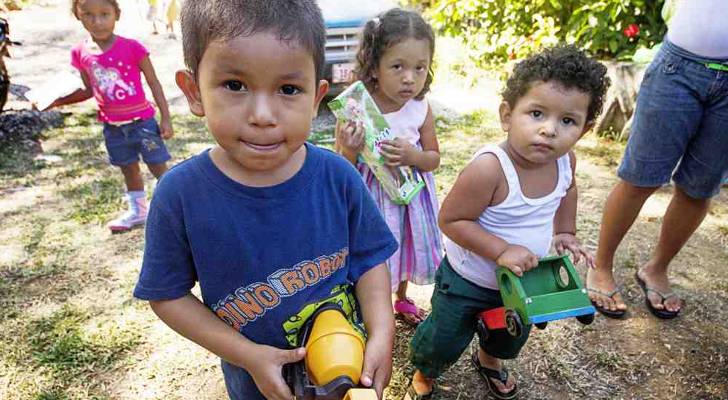 By: Ariana Crespo, VozdeGuanacaste – In Nosara, members of the Social Pastoral organized a party for gift giving for the first time. The activity was held in the Catholic Church in Nosara on December 21. A Mass was dedicated to the kids and then they participated in the distribution of candy, food, gifts and music.

According to the official count, more than 300 children attended the party. Despite trying to be prepared for whatever might come up, resources weren’t enough to satisfy everyone this year. “Quite a lot was lacking to have been satisfied. It didn’t turn out like we thought. Twelve children didn’t get to eat and 30 gifts were missing. The place was very small. The next one will be organized in the plaza or in the bullring if it’s available. Things didn’t go well, but I think the second time will be better,” Hernandez said.

Yolanda Lopez, a mother, commented that they should have paid more attention to several details. “The organization needs to improve so next time there will be more order, lines and so not as much trash is left. It is nice that things like this happen, to gain experience and correct things.”

On Sunday, the 22nd, in the Matambú indigenous territory, a party was organized for about 500 children and 300 adults. The director of the school of Matambú coordinated with representatives of the towns of Matambuguito, Hondore and Polvazales to make a list of the children to invite.

The group Hermanos Cristianos de Alajuela (Christian Brothers of Alajuela), led by Roxana Chavarria, started collecting donations in October and took care of all the details of the party.

Jose Vivian, school director, says about the party, “The activity was very good, excellent. The brothers took care of everything. The only thing that the Association of Matambú provided was the community hall. All received gifts. The children were very happy because everything was done in an orderly fashion.”