Church and State in Nicaragua: Letter From Managua 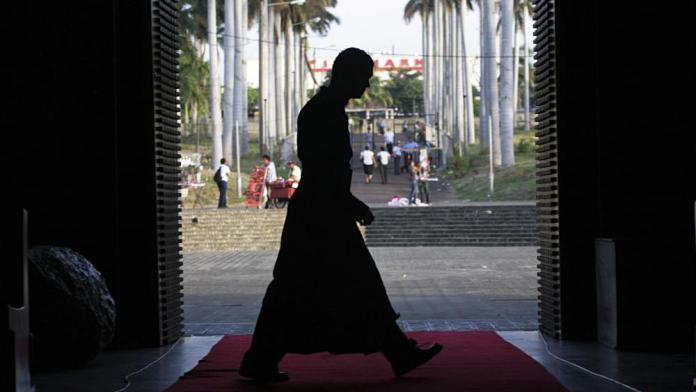 Between 2013 and 2015, the government of Nicaraguan President Daniel Ortega spent roughly US$3.2 million installing decorative metal trees in Managua, Nicaragua’s capital. The “trees of life,” as they are called, weigh more than seven metric tons each. At dusk, the biblically inspired sculptures come alive with the glow of thousands of lightbulbs.

On NIC-4, Managua’s main north-south artery, the trees are flanked by campaign posters from the 2016 presidential election. Ortega appears next to the slogan of his party, the Sandinista National Liberation Front (FSLN), which won the election by a wide margin: “Christian, socialist, solidarity.” At Ortega’s side is Rosario Murillo, his wife and vice president.

The coincidence of the biblical sculptures and election posters is no mistake. Ortega, a former guerilla leader and atheist, has turned to religion to cement his power, passing laws to please the faithful and using priests as advocates of his policies. The Nicaraguan church, once an ally of the right-wing dictatorship Ortega helped overthrow, is again becoming a partner of the state.

There has never been a real separation of church and state in Nicaragua. Under the Somoza family, a dynasty of brutal U.S.-backed dictators who ruled the country from 1936 until 1979, gifts and favors flowed freely from the country’s rulers to its religious leadership, which rarely criticized the government. As late as 1977, as a revolution brewed against Anastasio Somoza, church leaders led masses across the country to pray for the ailing president’s health.

In 1978 and 1979, as the FSLN, then an armed left-wing insurgency, struggled to take control of the country, some reform-minded priests defied their superiors and joined the opposition. Others took up arms with the guerrillas. In July 1979, Somoza fled, and a number of priests joined the Sandinista-dominated Junta of National Construction as ministers. The Vatican defrocked them for their involvement in politics.

Ernesto Cardenal, one of Central America’s most celebrated poets, was one of those priests. From 1979 until 1987, he was Nicaragua’s minister of culture, first under the junta and then during Ortega’s first presidency, which lasted from 1985 to 1990.

Like many others who served in the revolutionary government, Cardenal became a critic of Ortega as his authoritarian tendencies grew between his presidencies, when he served as his party’s leader. When Ortega returned to office in 2007, his government sought to cement its power by backing court cases against its opponents, including Cardenal. He and others began to worry that the man who had helped topple the Samoza dynasty was seeking to establish one of his own. Today, Ortega’s family dominates Nicaraguan politics, and a small circle around him has grown rich. “Ortega and his wife are hypocrites, not Christians or revolutionaries,” Cardenal, now 92, said in Managua in May. “There is a dictatorship now.”

As Ortega turned on the men of the cloth he once worked with, he found allies among other church figures. Cardinal Miguel Obando y Bravo is one of them. Like Cardenal, Obando’s relationship with the FSLN has transformed. In the 1980s, Ortega’s government accused Obando of being the “arch enemy of the revolution” and of seeking to obtain U.S. support for anti-government contras. The animosity was mutual and longstanding: days before the 1996 presidential election, which Ortega lost, Obando delivered a church sermon in which he likened Ortega to a biblical snake.

That relationship underwent a reversal in 2005. That April, the Vatican accepted Obando’s resignation as head of the Archdiocese of Managua, and Obando’s relations with Ortega warmed. Months later, he officiated Ortega and Murillo’s marriage, and the next year, he campaigned for them during the run-up to the 2006 presidential election.

It is not clear why Obando changed his position. Some have speculated that he did so to protect Roberto Rivas, a man many believe to be his biological son, from official pressure. “Obando was forced to cozy up to Ortega because of the corruption of Rivas, who is a kind of adopted son of [Obando]… Rivas made millions of dollars illicitly and put the cardinal in an awkward position,” the former Education Minister and Opus Dei minister Humberto Belli told El País in 2009.

If Obando’s motivations were unclear, there is little ambiguity about the advantage his support gave the Ortegas. As the demand for religious policies, such as bans on abortion, grew in Central America, the blessing of the Nicaraguan church’s former leader gave Ortega the credibility to lead that movement in his country. “In the past, [the Ortegas] were against the church, but then they understood that made them unpopular,” Cristiana Chamorro, a daughter of former President Violeta Chamorro, who defeated Ortega in the 1990 elections, said in May. “Now, [Obando] is the family priest.”

But after years in political exile, Ortega needed to prove his conservative religious credentials before the 2006 elections. So 11 days before the vote, he threw his party’s support behind a proposed ban on all forms of abortion—one that would imprison women and healthcare professionals involved in ending pregnancies. Lawmakers passed the measure quickly, before Ortega won the presidency.

Since then, Ortega has consolidated his power, establishing control of the legislature and the courts by outmaneuvering the opposition. Most media outlets are in the hands of the government or its allies. Nicaragua’s electoral commission has consistently issued rulings that favor Ortega’s party, and in 2014, Nicaraguan lawmakers passed a constitutional amendment amendment removing presidential term limits.

Meanwhile, the government has cracked down on the opposition. In June 2016, the Supreme Court removed a leading opposition figure from his own party, the Independent Liberal Party, preventing him from leading a campaign against Ortega in the November election. Then, in August, Nicaragua’s electoral council expelled more than two dozen opposition lawmakers from the National Assembly after they refused to recognize the new court-ordered leader of their party. With the opposition neutralized, Ortega has been free to consolidate his rule.

Part of that consolidation has focused on the church. Rafael Aregon, a Dominican priest based in Chinandega, said that the government has secured many priests’ loyalty by building churches and mobilizing party loyalists for important religious events. Those efforts have increasingly been paying off. For months, the Nicaraguan council of bishops has been trying to issue a joint letter criticizing the government of Venezuelan President Nicolás Maduro, a close ally of Ortega. But pro-Ortega bishops have successfully divided the council and kept it from taking action. “Favors,” Aregon said, “make priests silent.”

Reporting for this story was made possible by a grant from the International Reporting Project.

- Advertisement -
Paying the bills
Previous article“Truce In The Rains” Not To Be Repeated This Week, Says Weather Service
Next articleNicaragua Unveils Central America’s Largest Baseball Stadium