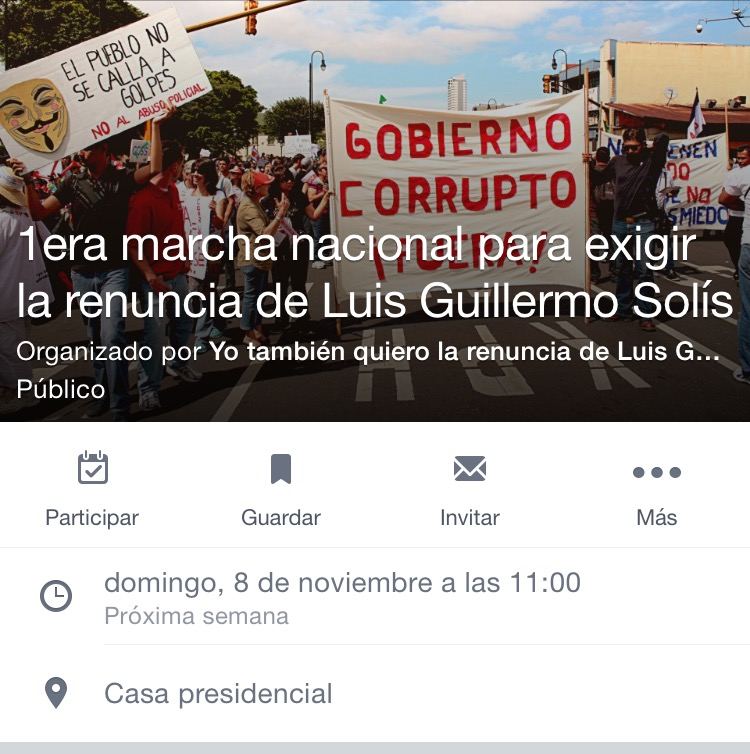 QCOSTARICA – Get ready for another protest march. But this one will not be during the week or against the government, but, rather the person leading the government, President Luis Guillermo Solis.

A group of citizens, preferring anonymity and citing security issues gripping the country, are making a call on everyone to a protest march to “demand the resignation of President Luis Guillermo Solis” and “demand the Tribunal Supremo de Elecciones call a new election”.

The protest march would be on Sunday, November 8, in front of Casa PresidenciaL in Zapote.

The organizer of the march told Crhoy.com that personal information will not be revealed “in order to ensure their safety and physical integrity, due to various threats”.

The online publication noted that the organizers are calling for a “totally peaceful gathering following the examples in other countries.

The organizers say there will be a series of protest marches, that could include a camp out in front of government house.

In support, the group “Ya No Mas Recope” is calling on its followers to join the November 8 protest.

QCOSTARICA - President Carlos Alvarado said he has all the confidence in his Minister of Public Works and Transport (MOPT, Rodolfo Méndez Mata, and...
Politics