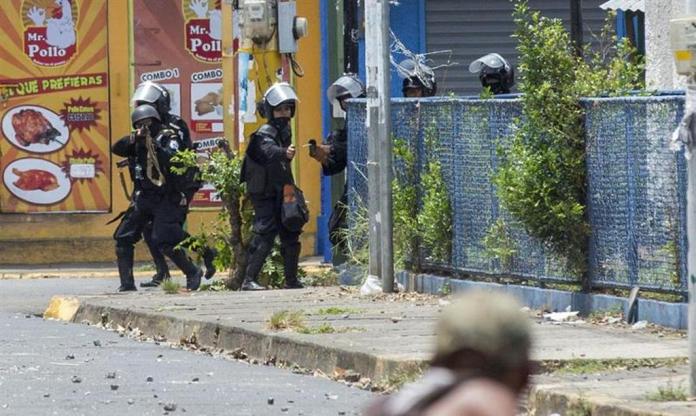 The clashes Saturday afternoon in the city of Masaya left a person dead and a young man wounded, an reported fire damage in the municipal market.

Auner García, director general of the Nicaraguan Red Cross, said in a press conference that they have a report that there is a deceased person, but that they were not the ones who attended the emergency.

The residents of the neighborhoods surrounding the main street that leads to the municipal market Ernesto Fernandez, defended themselves with stones against the bullets by anti-riot police.

Residents say they can not stand for the situation and that it is the riot police who are entrenched in the facilities.

The young people are elusive before the media because they said that the government can send infiltrators to record them and even start disturbances, including the fires.

“All went up on fire in a second, we can’t explain how it happened, if here there was the police, the odd thing is that only government people were safeguarding the building,” said Luis Madrigal, general manager of the market.

The protests have spread outside from the original center of discontent, the capital city of Managua. Currently, more than 10 cities across the country have reported protests, roadblocks and clashes between protestors, anti-riot police and pro-government supporters. Cities such as Chinandega, Granada, Masaya, Leon, Esteli, Rivas and Matagalpa that have reported clashes Friday and Saturday night.

The Episcopal Conference of Nicaragua (CEN) have given the Ortega government to stop the repression and initiate a national dialogue that will take the country out of the sociopolitical crisis it is going through.

Ortega accepted the conditions of the CEN Friday night, despite the police attacks that began minutes later.

There is yet start date to the agreed to dialogue, but the CEN, which is participating as witness and mediator, gave until Monday noon for Ortega to take “credible” steps to solve the crisis.

Today, Sunday, Nicaragua is in its 26th day of a crisis caused by mass demonstrations in favor and against President Daniel Ortega, which began on April 18 with protests in rejection of social security reforms and have continued regardless of the spilled blood and continued repression.