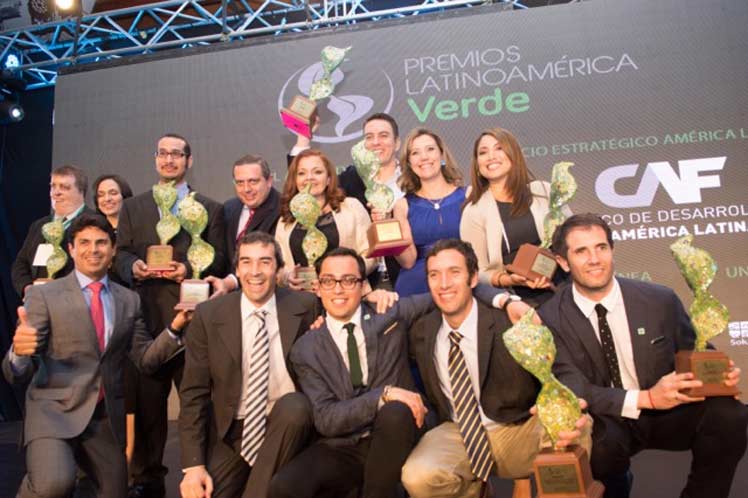 (Prensa Latina) Representatives of socio-environmental projects in Colombia, Chile and Ecuador today celebrate the awards won in most of the 10 categories in the Latin America Green Awards, held in the Ecuadorian city of Guayaquil.

The 10 winning works are part of the 30 best initiatives for environmental care in Latin America, evaluated by a jury between August 23rd and 25th.

Colombia received the most awards: three statuettes in the categories of water, emissions and solid waste management, followed by Chile with two in Biodiversity and Wildlife and Human Development, Social Inclusion and Reduction of Inequality and Ecuador with an equal number in Forests and Flora and Oceans.

Peru, Brazil and Costa Rica got awards in the sections of Urban Management, Production and Responsible Consumption, Sustainable Finance and Energy, respectively.

The award ceremony was held at the Hilton Colon Hotel of Guayaquil, is is also the home of the event.

As a special moment, the organizing committee decided to grant a special award to Colombian singer Carlos Vives, for his work in favor of environmental conservation.

Vives was chosen for this distinction, which was given for the first time, due to his concern about issues related to the protection of the planet and especially his Project ‘Tras la perla de América’, the President of the Organizing Committee of the Awards, Gustavo Manrique told Prensa Latina.

The initiative promotes the growth of the region of Santa Marta to help enhance sustainable development that implies access to drinking water, port development and the preservation of the Sierra Nevada.

In the third edition of the awards a total of 1407 projects of 513 cities in countries like Colombia, Chile, Mexico, Argentina, Peru, Venezuela, Brazil, Costa Rica, Bolivia, Cuba, Curacao, El Salvador, Honduras, Canada, Spain and the United States were presented.

Latin America Green is a platform that connects, exhibits and awards the best socio-environmental initiatives in the region, but we also include Spain, the United States and Canada for their relationship with the area, he said.

Finally, he thanked the institutions that collaborated with the contest for their support, including the United Nations, the Development Bank of Latin America and the Municipality of Guayaquil.

- Advertisement -
Paying the bills
Previous articleMore Than 200.000 Displaced Due to Violence in Honduras
Next articleMore than half of Venezuelans live in high-risk dwellings