South AmericaColombia
By Rico
25 May 2014 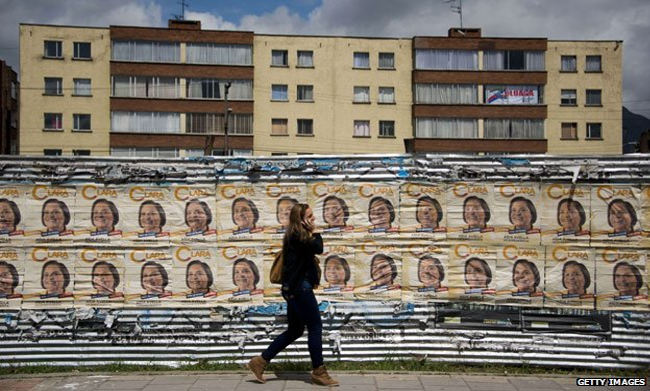 President Santos got a 25.6% approval in the voting to Zuluaga’s 29.3%, both short of the 50% required to take the elections in the first round.

More than 32 million people were eligible to vote in the election that largely become a referendum on the correct strategy for ending a 50-year conflict that has killed hundreds of thousands of people and displaced more than five million others.

Santos launched peace talks with the the Armed Forces of Colombia (FARC) rebels in 2012 after eight years of attempts to defeat the insurgency with military means.

Right-winger Zuluaga has criticized the talks as pandering to terrorists, and has indicated he would scrap them in favor of US-backed military campaigns similar to those led by his mentor, former President Alvaro Uribe.

A majority of Colombians support the peace talks, which have so far led to agreements of rural reform, the inclusion of former guerillas in politics and the fight against drug trafficking.

Santos has, however, not called a ceasefire during the negotiations in order to maintain pressure on the guerrillas.

Zuluaga’s critics, including Santos, dismiss him as a puppet of Uribe who would effectively allow the hardline former president to rule from behind the scenes. Others note Santos faced similar criticisms before his break with Uribe.

The election campaign was rocked by a series of scandals, including accusations that Zuluaga’s team sought to sabotage the peace talks by hacking negotiators’ email accounts and allegations that Santos took drug money during his 2010 campaign.

Both deny any wrongdoing.