Colombia Is Backdrop For “Metastasis”, The Breaking Bad Series in Spanish

Though the idea of a homegrown methamphetamine empire in the hemisphere’s cocaine capital seems dissonant, the producers stuck with the plot point.

TodayColombia News – Bogota, Colombia, will be the set for the Spanish version of “Breaking Bad”, where Diego Trujillo will play Walter Blanco (Spanish for White), the chemistry teacher turned meth king .

Traditionally American television movies and series are shown in Latin America in their original form with subtitles or dubbed. However, given the extreme popularity of Breaking Bad, Sony Pictures Television and Colombia’s Telest announced a complete remake of the series, and instead of Albuquerque, New Mexico as the background, it will be Colombia’s bustling capital city.

The series will be called “Metastasis”, but that’s virtually the only change the producers are making.

The new show is “very, very close” to the original, said Angelica Guerra, senior vice president and managing director of production for Latin America and the Hispanic market in the United States for Sony Pictures Television.

As many U.S. television viewers know, Breaking Bad follows the story of White, a New Mexico chemistry teacher who reacts to a cancer diagnosis by cooking up the Southwest’s purest methamphetamine to pay his medical bills and leave his family a nest egg. Over the course of five seasons, the audience watched White devolve from mild-mannered, sweater-vest-wearing schoolteacher into a sociopath with a knack for making blue crank and rubbing out his rivals.

“It’s a story that could happen anywhere in the world and especially in [Latin America],” Guerra said.

At first blush, the idea of a homegrown methamphetamine empire in the hemisphere’s cocaine capital seems dissonant. But the producers stuck with the plot point.

“We did exhaustive research on the issue because, obviously, [meth] is a business much more rooted in the United States and Mexico,” said the show’s executive producer, Andrea Marulanda. “But we found that over the last two years the market has been growing in Colombia.”

And by the time the show airs in 2014, the drug will likely be even more visible, she said.

Metastasis producers worked closely with Breaking Bad creator Vince Gilligan, running proposed changes through his team. The two concessions they mention seem quite minor: In the original, White cooks his first batch of meth in a mobile home. In Colombia, those vehicles are so rare you’d likely get stopped out of sheer curiosity. So Blanco will be using a school bus. Also in the original, White was a public schoolteacher with a solid middle-class lifestyle. That simply wouldn’t fly in Latin America, where teachers are notoriously underpaid.

“It was not going to be credible that he works at a public school if they live the way they live in Bogotá,” Guerra said. So Blanco works at a private school.

The other change is the show’s delivery. Rather than seeing Metastasis over the course of five seasons, Latin American audiences will be able to mainline all 62 episodes in three months.

Sony is fond of cross-cultural retreads. It has adapted Married…with Children in 12 countries, including Colombia and Israel; Everybody Loves Raymond in the Middle East and Russia, and The King of Queens in Bulgaria. 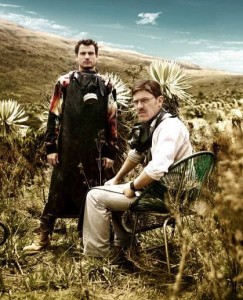 And U.S. audiences are increasingly embracing shows from abroad like Ugly Betty (Colombia), The Office (U.K.) and The Killing (Denmark).

Viewers should get used to it, Guerra said.

“It makes sense because you have shows with a proven track record…that have been a success in the past in the U.S. and other countries; it makes them easier to sell and produce,” she said. “It’s a trend, definitely, and it’s a model that we are putting into place as part of our strategy in the region.”

In a sense, the company took a blind leap with Breaking Bad. It began rolling Metastasis before producers even knew how the original was going to end.

Guerra says that she, just like 10.3 million other viewers in the United States, was sitting on a sofa last weekend with popcorn waiting for the finale. She wasn’t disappointed.

“We had the certainty that whatever Vince Gilligan had in his mind was going to work,” she said. “It was a no brainer.”

- Advertisement -
Paying the bills
Previous articleBacklog of 17.000 Surgeries Await The New Operating Rooms At the San Juan de Dios
Next articleCybercrime Treaty Could Be Used to Go After Cyberespionage

QCOSTARICA  - The 200 years of the Independence of...
Redaqted