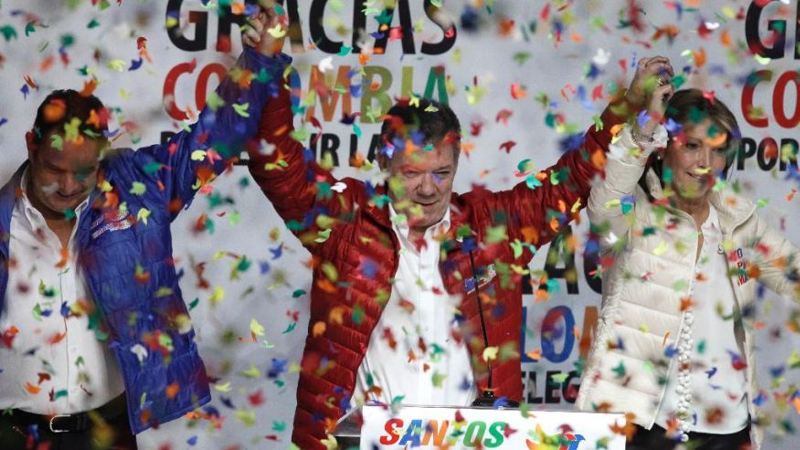 TODAY COLOMBIA NEWS – Juan Manuel Santos convincingly won re-election Sunday after Colombia’s tightest presidential contest in years, an endorsement of his 18-month-old peace talks to end the one of the longest-running conflict.

Colombians voted the incumbent Santos with a 53% approval, against 47% for Oscar Ivan Zuluaga, a candidate with the backing of former two-term President Alvaro Uribe, who many considered the true candidate against Santos.

600,000 Colombians cast  a “blank” ballots, a protest vote for neither candidate. 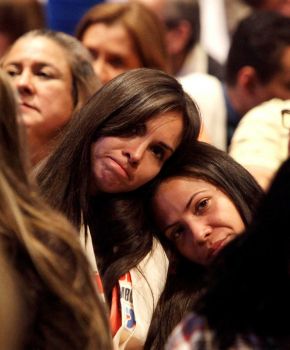 Zuluaga and Uribe accused Santos of selling Colombia out in slow-slogging Cuba-based negotiations, and said Zuluaga would halt the talks unless the rebel Revolutionary Armed Forces of Colombia (FARC) ceased all hostilities and some of its leaders accepted jail time.

Santos said the win affirmed his claim to be ably steering Colombia through a historic moment — out of a crippling conflict that has claimed more than 200,000 lives, mostly civilians.

“This is the end of more than 50 years of violence in our country and it is the beginning of a Colombia with more justice and social inclusion,” Santos told cheering supporters. “In four years no one will regret having voted for us.”

He flashed his palm emblazoned with the word “Paz,” or peace — his campaign slogan. Many palms in the crowd were similarly inscribed.

Santos sought a second four-year term on the strength of the negotiations he began 19 months ago in Havana. He had cast the election as a vote between war and peace, saying that if he wasn’t re-elected, his opponent would swiftly end talks with the Rebels, leaving Colombia with little option than to escalate its simmering conflict.

“This is the end of 50 years of conflict in this country, and it is the beginning of a new Colombia,” Santos told supporters in a victory speech.  “This won’t be the peace of Juan Manuel Santos, nor this government’s peace. It will be a peace of all Colombians, it will be your peace.”

Zuluaga quickly conceded defeat. “I have to, first and foremost for my democratic convictions, congratulate President Santos for his triumph,” he said in a speech to followers in Bogota. “We gave him quite a fight full of ideas, proposals and dreams for Colombia.”

QCOSTARICA - Within the framework of the B2B Forum...
Front Page