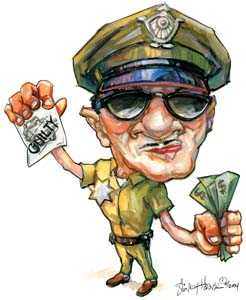 TODAY NICARAGUA – His face was smiling, but it was clear he wanted cash. And he had my driver’s licence. He was a member of the Nicaraguan National Police and he had pulled us over outside the capital city of Managua for reasons unclear to me.

His Spanish was rapid-fire and my requests to slow down, lentamente por favor, had zero effect. But I came to understand that when he pulled me over I hadn’t done it quickly enough. It had looked to me like he was gesturing to slow my speed with a palms thrusting down motion, but, to, my dismay, he was still at it when I looked in my rear view mirror. So the crime of pulling over 50 yards down the road was going to cost me 4,000 Nicaraguan Cordobas, about US$160. And If we didn’t come to an agreement, I had to follow him back into the chaotic Managua traffic to pay up at a bank.

Eventually, he decided that maybe a pair of American $50s might be the appropriate penalty for my crime. I had the money in my hand, but he suddenly gestured to hide it as a pedestrian passed on the curbside. Then he slid a clipboard in the window, told me to roll the bills into a tube and slide them into the pages of a receipt book. Not that there was any receipt forthcoming.

Then a big smile and firm handshake as he handed me back my licence.

Our best assumption, my girlfriend Reneta and I, is that this means he never actually accepted any money. That would be a bribe! He would later just open his book and, what luck, find $100.

The second time, also on a highway not far from Managua, was remarkably similar. This offence was that the motor vehicle inspection document in the glovebox was two weeks out of date. No matter that this was a rental car. This was my fault and it was going to cost 1500 Cordobas, about $60. This guy wasn’t budging. Again he had my licence and it was either pay or take a trip to a bank with him in the Managuan chaos. Again I folded the cash in a roll and into a receipt book and got another bright smile and handshake.

Afterwards, I realized in my flustered confusion and mixing up Cordobas and US dollars that I had actually given him an extra $20. A tidy little tip for a job well done.

An employee at the Nicaraguan Consulate for Canada, based in Washington, D.C., who declined to be identified, said she had only rarely heard complaints from tourists, but conceded that police corruption is a problem for Nicaraguans.

“In the country, yes, it is an everyday complaint of people.” She called the paying of money directly to police to avoid a larger ticket or prosecution a “vicious circle.” In casual conversations with half a dozen resident “gringos”, all said they had been hit up for bribes on the highways.

The current Sandinista government of Daniel Ortega, in admittedly anecdotal conversations with both Nicaraguans and expats, is more or less popular, but there are allegations of dysfunction, lack of press freedom and, especially, corruption. But it also known as one of the safer and friendliest countries in Latin America.

In a place that has had its share of revolutions, catastrophic earthquakes, a Contra war and which remains one of the poorer countries in the Western Hemisphere, the irony is the only time in two weeks of driving far and wide that I felt even remotely uneasy was when I was being shaken down by the National Police, the very people you are supposed to trust the most.