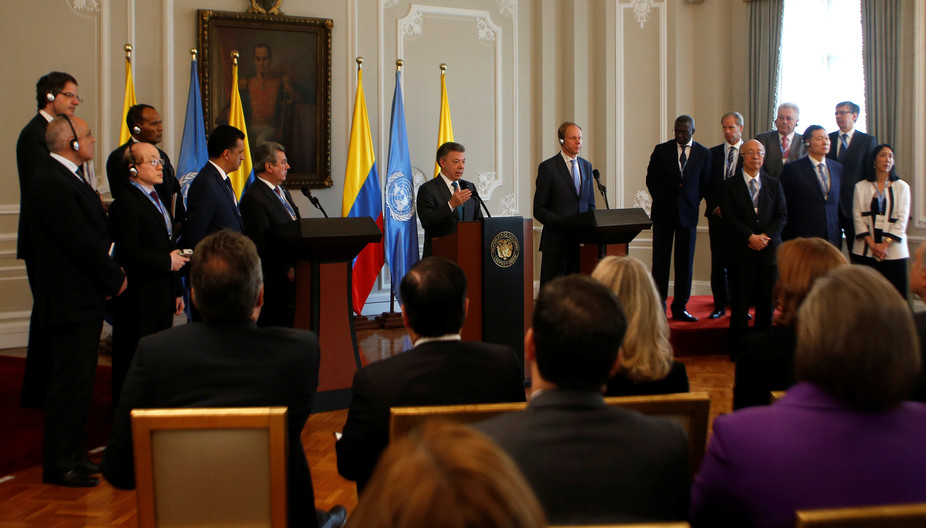 This article, originally published on April 5 2017 with the headline “For Colombian rebels, a risky shift from armed revolt to party politics”, has been updated to reflect the latest developments in Colombia’s peace process.

As of today, the Colombian Armed Revolutionary Forces are armed no more.

After missing the initial May 31 deadline to hand over their weapons, the FARC guerrillas have now completed the disarmament process, closing (perhaps) the final chapter of a 50-year conflict with the government of Colombia.

In a tweeted statement, FARC leader Timochenko has called disarmament “an act of will, bravery and hope”.

The peace process, which officially began with an accord signed on November 30 2016, has run up against numerous obstacles – from the inadequate FARC centralisation zones and a much-criticised amnesty law to the alarmingly frequent assassinations of Colombian human rights activists.

Now the country – and the FARC – is asking how well the decommissioned fighters from this half-century-old Marxist insurgency will transition back into civilian life.

For peace to stick, a violent rebel group must now successfully become a political actor, deeply transforming who it is, how it sees itself and what it does. And while commanders like Timochenko have a clearly political vision for the FARC’s future, the path there remains fraught, particularly for the now out-of-work rank-and-file soldiers.

As a recent deadly bombing in Bogotá confirmed, the end of one of the longest-standing guerrilla insurgencies in contemporary world history does not mean the end of violence in Colombia.

As a political party, the FARC – consummate political outsiders – will have to establish dialogue with other parties and social movements. At the moment, this is difficult to envision. Negotiations with the the FARC faced stiff opposition, and the organisation still features on the US terrorist watchlist.

Currently, no politician dares to suggest an alliance. But in the long run, such domestic relationship-building seems both necessary and probable. Most likely, the FARC will seek to build ties with Colombia’s leftist national parties and social movements, as it has done in the past.

In the 1980s, negotiations with the FARC and other rebels resulted in the Patriotic Union, a big-tent leftist political party. In the decade to come, more than 3,000 party representatives were assassinated, including presidential candidate Bernardo Jaramillo Ossa. For the FARC’s leaders, this hardly feels like ancient history.

In addition to the threat of violence, the question of whether the reinvented FARC will be allowed access to the highest spheres of national political power is very much open one. Will Colombia’s political establishment accept these fighters-turned-politicians?

One thing is certain about the FARC’s reinvention: not all members will benefit equally from the organisation’s shift from armed insurgency to political party.

The FARC is heterogeneous, with a relatively high female participation rate (around 40% are women), a fact that has attracted the most public attention.

It is also diverse in terms of ethnicity, age, education level and social origins. Like Colombian society at large, the FARC’s fighters are Afro-Colombian, indigenous, white and mixed-race. Some members are college graduates from middle-class homes who have been in the group for decades; others are poor teenagers who joined a few years back.

Its leadership, however, looks less varied. Like any social group, the FARC’s internal power relations reproduce the social hierarchy of the outside world: from lead peace negotiator Ivan Marquez to general Timochenko, the orgnisation’s highest-ranking, most publicly visible officials are mostly white men.

As a revolutionary movement, the FARC sought to abolish historical social power relations, or at least to reinvent them. And, up to a point, the group was indeed able to overcome much of the social discrimination that is so deeply institutionalised in Colombian society.

FARC women have enjoyed (some) greater sexual freedoms and reproductive rights, and poor kids got a free education.

The gender subcommittee of the peace negotiations, established in September 2014 after pressure from women’s groups and international organisations, represented an opportunity for learning and leadership for female FARC fighters.

Victoria Sandino, the FARC delegation’s subcommittee chairwoman, stepped out of the shadows to become a prominent principal spokesperson of what the FARC is now calling “insurgent feminism” – a set of collective anti-patriarchal, anti-racist and anti-classist practices built from the lived experience of female FARC fighters.

The experience of negotiation with political actors from different countries and ideologies shows how exchanges might contribute to mutual learning and help guide the deep transformation underway within the guerrilla group.

As a political party, the FARC will find itself compelled to create new opportunities for political participation of other minority members as well.

Colombia is highly unequal, with marginalisation based on race, class and gender. As soldiers become civilians, the reintegration process is likely to highlight, and maybe reinforce, inequalities that were less visible when the FARC was a military organisation.

Now that the group is not the sole provider of material support to its members, for example, high-ranking former combatants with a diploma and family support are likely to be better able to navigate the postwar period than their less privileged peers.

As experience from other countries’ transitions out of armed conflict shows, decommissioned soldiers who are not well trained for a new career or supported sufficiently during their transition are more likely to rejoin armed militancy.

To date, there has been dangerously little attention paid to providing psychological support for ex-FARC fighters (and, more broadly, to the general mental health issues that arise in post-conflict nations).

The persistence of of paramilitary groups in Colombia suggests that some former fighters of the Colombian armed conflict may not be ready to actually disarm.

As the FARC lays down its weapons, officially entering an explicitly political stage of life, potential spoilers to peace – both those outside of the FARC’s control and those well within its mandate – remain pressing in Colombia.