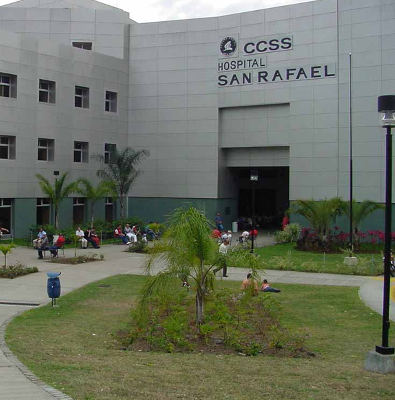 QCOSTARICA – The Constitutional Court (Sala Constitucional) ordered the Caja Costarricense de Seguro Social (CCSS) to pay damages to a woman who was subjected to what she describes as “degrading and humiliating” treatment during a physical examination at the San Rafael de Alajuela hospital.

The story goes back to the August 7, when the 34 year-old woman arrived at the prison to visit an inmate.

The Court report indicates that prison authorities say they had received confidential information that the woman would be attempting to smuggle narcotics into the prison. A physical inspection by prison officials found nothing, but, later a drug sniffing dog gave a positive response.

Prison officials contacted the Fiscalia (prosecutor’s office), which authorized the transfer of the woman to the Alajuela hospital for an x-ray.

According to testimony by the woman, the x-ray revealed nothing and although there was no evidence of concealed narcotics, a gynecologist performed a rectal and vaginal exam while she was handcuffed.

The exam did not find any illegal drugs.

The woman said that when she was finally freed, she was not offered any explanation as to what had just occurred.

The Court, in their ruling, agreed with the woman and stressed that before any physical examination such as the woman was subjected to, there should be sufficient evidence of illegal activity and medical staff should use less invasive methods.

The ruling absolved the Ministerio Public and the prison.

Pablo Bertozzi, director of the Prison Police (Policia Penitenciaria) said Friday that the decision to keep the woman handcuffed during the procedure was up to the doctor.

The prosecutor’s office confirmed that, before the woman was transferred to the hospital, it had ordered that if the x-rays were negative, she was to have been immediately freed.

Francisco Pérez, director of the Hospital de Alajuela, in a statement to the Court, said the hospital responded to the order to examine the woman and if anything (such as illegal drugs) were found, proceed to remove it from her body. Pérez said that during the procedure, the woman did not receive any degrading treatment and that the medical report indicates she did not refuse the exam.

The woman’s name or the amount of the damages was not made public.

- Advertisement -
Paying the bills
Previous articleSnakebites in Costa Rica Are Associated With Poverty, Weather Fluctuations, and El Niño
Next articleAmador A Splash In Spain