The number of patients with covid-19 in Costa Rica increased in 16 cases from 467 to 483, according to the latest report released by the Ministry of Health, on April 7, 2020.

A total of 24 have recovered and 2 deaths, leaving the number of active cases at 457.

The minister explained that 25 patients remain hospitalized. Of these, 14 are in intensive care. The age of these people ranges from 35 to 85.

On the other hand, Salas indicated that the number of cantons registering at least one confirmed case rose from 55 to 56 with the joining of Turrialba, Cartago, to the list.

To date, three patients have arrived at the covid-19 exclusive hospital, the Cenare, located in La Uruca, to care for people in serious condition.

In response to press inquiries, Minister Salas clarified that although this Monday he highlighted 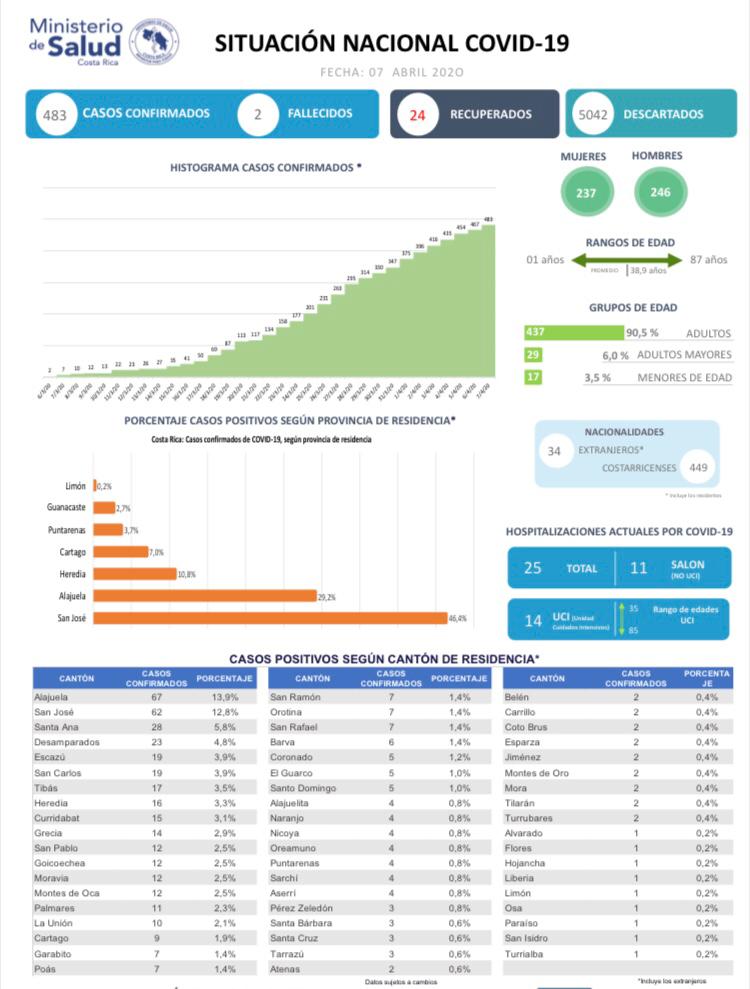 the good response of the majority of citizens to measures to prevent the massive spread of covid-19, we cannot “claim victory.”

He insisted on staying alert because there are possibly a “very important” number of patients who have not manifested symptoms (asymptomatic) and that could put their nearby nucleus at risk.

The minister noted, however, that the viral load that people without symptoms have is much lower than that of those who do have them.

“There are countries that have reached the third fortnight and have relaxed their measures entirely or a lot, that the population has trusted and had a significant increase of cases that we do not want to have in our country.

“We have already passed a month but we cannot say that we have already reached the peak and that the maximum point of the curve has already been exceeded,” he warned.

On the other hand, Salas and Román Macaya, executive president of the Costa Rican Social Security Fund (CCSS), took the opportunity to express their gratitude to all the country’s health personnel on World Health Day.

Fines for violating the vehicular restriction

Salas reported that this Monday, during the daytime vehicle restriction (5 am to 5 pm), 291 drivers were fined and 882 tickets were issued for other infractions.

Meanwhile, between Monday 5 pm and Tuesday am, 625 drivers were sanctioned for disrespecting the night restriction.

An issue raised by Minister Salas based on complaints received by authorities is the unscrupulous practice of some taxi drivers to alter the “marias” (meters), overcharging customers.

These drivers take advantage of the situation and ban on ride app transports at night and limited circulation during the daytime.

Taxis with altered meters this writer often refers to as “turbo taxis”, similar to vehicles with turn engines to boost their power, the turbo taxis run faster, adding up charges faster without the user realizing it.

Minister Salas made a continued appeal to all under a Health order to isolation or quarantine to company or face sanctions that range from ¢450,000 to ¢2.3 million colones.

Health or quarantine orders are issued to those suspected of being infected and infected with the covid-19 to stay at home and maintain social distancing. Also, Costa Ricans and residents returning to the country are issued, on arrival, a mandatory 14-day isolation order.

Facial shields made in Costa Rica

The president of CCSS highlighted on the self-sufficiency efforts that the country is making to manufacture face shields that offer protection to health personnel.

Macaya pointed out that the manufacture of 600,000 protectors has already begun thanks to the coordination between the Logistics Management of the CCSS, the Occupational Health Area, the Chamber of Industries, the Technological Institute of Costa Rica (Tec), and the Incae

He indicated that the CCSS hired the Grupo Vargas company for the production of the equipment. This week, the first 100,000 masks will be delivered. The cost of each one is ¢600 (a little less than a US dollar).

Macaya also highlighted the help of other companies and institutions in dealing with the emergency, for example, in the distribution of medicine. As of April 6, the CCSS had been delivered to 48,746 patients with chronic diseases.

Macaya also publicly thanked the Banco Centroamericano de Integración Económica (BCIE) – Central American Bank for Economic Integration – for the donation of 26,000 diagnostic tests for covid-19 and thanked the Honduran government that coordinated delivery by air to the entire region.

According to Macaya, it is intended to carry out samplings throughout the country and that other technologies are being sought, such as portable analytical devices, that allow decentralizing the analysis of samples even more.

Health Minister Salas was careful with his words in his reaction to the Pan American Health Organization (PAHO) about the inadequate prevention and lack of covid-19 controls in Nicaragua.

He admitted that the PAHO pointed out that in that country there have been actions that are not aligned with the indications given to all nations, adding that he would not refer to the matter, it was in the hands of the diplomats of the Foreign Ministry.

The concern for Costa Rica is the cross border movement of Nicaraguans, in particular during Semana Santa, when tens of thousands of Nicaraguans make an exodus for their home country for the religious period and then back to Costa Rica where the live and work.

This year, the border has been closed to all foreigner arrivals, and as of March 24, all residents of Costa Rica who leave the country will not be able to return during the national emergency is in effect.

The closing of the borders was original until April 12 but is now extended to April  30.

Despite the closing, the reinforcement of police along the 309 kilometer border with Nicaragua and the presence of the Nicaragua Army on their side of the border, many continue to make crossings through “blind spots”.

“We know that governments are sovereign and an appeal is being made,” said Minister Daniel Salas. “We have said that surveillance at both borders has been strengthening.”

Both Macaya and Salas stressed that medical attention is provided to everyone, regardless of their nationality and migratory status in the country, suspected or infected with covid-19.

- Advertisement -
Paying the bills
Previous articleLucía Pineda assures that “Daniel Ortega will soon come out of his eternal quarantine”
Next articleIsolation with great inequality, warns State of the Nation