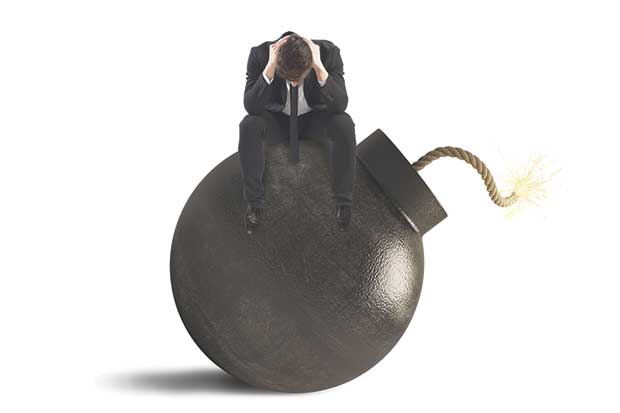 QCOSTARICA – The Costa Rica economy is a time bomb, where increased debt accelerates the countdown, says a report by La Republica.

It is expected that the deficit this year will be lower than in 2015; however, the efforts made so far is like covering your eyes from the sun with one finger, writes Javier Adelfang in the article published Monday.

The country is facing an enormous economic challenge that could result in a financial crisis as debt continues to increase and little is being done to create new sources of income. Adding to the situation is the refusal of the opposition to approve the tax reform that will generate new revenue, the government’s refusal to spending cuts and a “negative” tax collection due to tax evasion, both individual and corporate.

How did we there here?

In 2009, then president Oscar Arias introduced the “Plan Escudo” (Shield Plan), aiming to mitigate the impact of the global crisis. This prompted government spending, especially in public employment, without any genuine increase in revenue.

Since that time numerous obligations were approved, many were noble, but without asking where will the money come from. Add to this the salary and pension situation of the public employees.

Tax evasion, both on sales and income, has become a huge stumbling block for the government. This has led each year the government to borrow, not only to meet basic expenses, but to pay down the debt accumulated in the previous year.

Financial experts say that the country is in a vicious circle: Half of next year’s budget will be financed with debt, and one-third of it will go to pay old debt and interest.

Adelfang says the circle is nothing more than a variant of the Ponzi scheme.

Ponzi schemes occasionally begin legitimately until failure to achieve the returns expected, then continues under fraudulent terms. The scheme get its name from, in the 1920s, in the U.S., when Charles Ponzi promised high returns in a short time for investment in his business.

At the beginning Ponzi could fulfill his promises of paying generous interest with the continuous flow of money from people investing every day. It ended when confidence in Ponzi was lost (that is no new investors) because of a publication of the Boston Post revealing  the scheme.

While Costa Rica has the confidence of the lenders who believe they will get back their money (and interest), but if the country does not generate substantive changes to improve the situation, since the scheme requires a continual stream of investments, it sooner or later, falls apart.

What is your take on Costa Rica’s economy? Let your opinion be known in the comments section below or post to our official Facebook page.