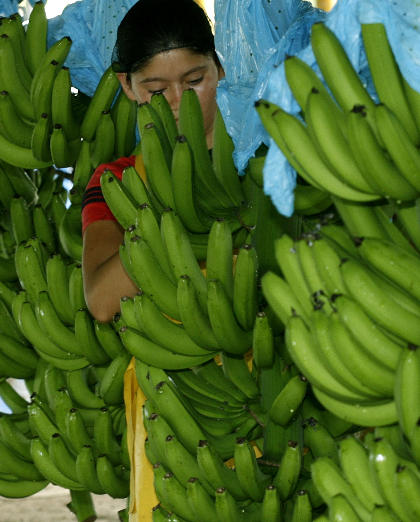 Costa Rica exported about 103 million boxes of bananas during 2012, a decline of 2% in production compared to 2011.

Jorge Sauma, president of the Corporación Bananera Nacional (CORBANA), said that this 2% decline is in response to the harsh climate they had in 2012, however, the industry predicts a more encouraging outlook for the current year.

According to a commercial alert from the Promotora de Comercio Exterior de Costa Rica (Procomer) – Costa Rica’s foreign trade office, the global banana supply would shrink in 2013, after a fall in the production from Ecuador and the Philippines, first and second product provider worldwide.

A plague that reduced by about 70,000 hectares banana plantations in Ecuador (30% of production) and the consequences of a typhoon that hit just over 26,000 hectares in the Philippines, decreased production for this year.

Sauma said that in this scenario, Costa Rica does not get any direct benefits, as it is occurring in response to current demand and the country would not be able to meet the increased demand.

“They have already established contracts and must comply with them. You can not rule out possible shortages, which could be supplemented by national fruit, but this is something you can’t guarantee,” he added.

QCOSTARICA - With fingers crossed, by February 2023, the...
Health