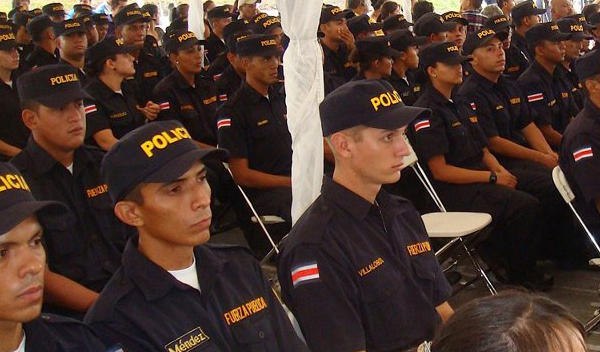 Infosurhoy/QCostarica News – Though Costa Rica has 14,000 police officers, 35% have not completed the basic police training course, which serves as an introduction to police work and teaches officers the basic skills to do their jobs.

The Police School wasn’t created until 1995, meaning officers who have been on the force for longer than 17 years never had to pass a single test to earn their badges, said Ricardo González, a press officer for the Ministry of Public Safety.

The lack of education and training among those veteran officers has hindered the Central American nation from having a highly efficient police force.

“It’s important for people to know many of the police officers who are currently on the street are poorly trained in handling weapons, preparing police reports and using personal defense techniques. They also are in poor physical shape,” former Minister of Public Safety José María Tijerino said in May 2010. “This leaves us defenseless, but it must be discussed in order to raise awareness about the current needs.”

The school, however, has become outdated and too small, which is why the Ministry of Public Safety will break ground on a new National Police Academy in March 2013. The facility will be able to house 800 prospective officers, who will take college-level courses and receive a bachelor’s degree in police science upon graduation, González said. The current academy has a maximum enrollment of 240.

“We’re going to sign an agreement with the National University of Distance Education (UNED) to provide police officers with an opportunity to earn their college degree and take continuing education courses in the field of police work,” Deputy Minister of Interior and the Police Marcela Chacón said. “[This is not] just a question of building new facilities and equipping them with cutting-edge technology. It’s also about updating the curriculum of the core courses regarding the basics of police work and new laws.”

The academy, which will feature 250 acres of facilities, will be built in the city of Guápiles in Costa Rica’s Atlantic region, about 60 kilometers (37.2 miles) from the capital city of San José.

“I don’t think the school we have now is big enough – it was time for us to consider something bigger,” said Public Force Officer Luis Martínez, who graduated in 2011. “As police officers, we have to know a lot of things and we spend very little time in the classroom. I think it’s great that they’re building the academy because it will give us more space to train.”

Commander Erick Lacayo, the director of the National Police Academy, said the curriculum would focus on teaching officers techniques to combat narco-trafficking and engage in civic initiatives and community policing.

“The idea is to professionalize the police so we are on the same level as other countries in the region when it comes to security,” Lacayo said. “The curriculum will be tailored to address organized crime and be extended to other police forces in Central America and the Caribbean as needed.”

The academy will have dormitories, 30 classrooms, pools, gymnasiums, tracks, shooting ranges, auditoriums and a technical training area for police officers that will feature a lifelike city so trainees can participate in drills in a realistic environment.

The academy will cost between US$40 million and US$50 million, which the government is funding through cooperation agreements with the European Union and China.

“The aim of these agreements is to ensure the promotion of security and social peace under a framework of respect for human rights and the fundamental freedoms of individuals,” Security Minister Mario Zamora said. “We’ll also strengthen the institutional capacity for prevention, police training and response to crimes.”

The EU contributed approximately US$17 million toward purchasing the equipment needed to train police officers.

“We share the view that insecurity has now become one of the most severe threats to the coexistence and welfare of citizens, and that it suppresses the growth and development of the country,” José Luis Martínez, the European Union’s Chargé d’Affaires to Costa Rica and Panama said in June.

González said he expects construction to be completed by December 2013, with the facility operational by early 2014.

Officials said the academy should satisfy all of the country’s law enforcement personnel issues for the next three or four decades.