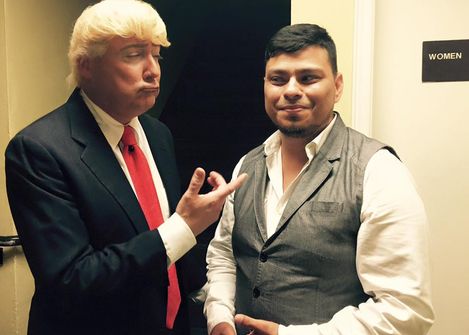 QCOSTARICA – Don’t poke fun at Costa Rica or you may not be able to visit. That was the case on Thursday when the Ministry of Public Security (Ministerio de Seguridad Pública – MSP) by way of the immigration service – the Dirección General de Migración y Extranjería – issued an alert to restrict access to the country of Nicaraguan comedians, Ryenaldo Ruiz and Jose Ramon Quintanilla.

Ruiz is known for his comedy acts poking fun at Costa Ricans – Ticos.

Ruiz and Quintanilla had planeed to tour the country with their humour from March 18 to 20.

“Costa Rica considers contemptible xenophobic manifestations. We respect freedom of speech but we consider most important safeguarding the physical integrity of these two artists from Nicaragua. Xenophobia between Costa Ricans and Nicaraguans is rejected by both governments (…),” said Security Minister, Gustavo Mata.

The order, according to the MSP, is based on Article 61 of the immigration law – Ley General de Migración y Extranjería – which can prevent a person entry into the country if “there are serious reasons if admission compromises public safety”.

In Nicaragua, the Laprensa.com.ni reports the ban generated anger from the organizers, explaining that also Costa Rican comedians poke fun and make disparaging jokes of Nicaraguans.

Ruiz had promised to do no more xenophobic jokes against the Ticos following the video, La Tiradera, produced fives ago by a Costa Rica television station and denounced by Nicaragua’s ambassador to Costa Rica, Harold Rivas.

The MSP’s concern is that the lives of the Nicaraguan comedians was at risk if they were allowed to enter the country, basing their opinion on “intelligence reports”, reported the Elnuevodiario.com.ni.

Sources: La Nacion, Laprensa.com.ni, Elnuevodiario.com.ni
What is your opinion on this ban? Express your opinion by way of the comments below or on our Facebook page.