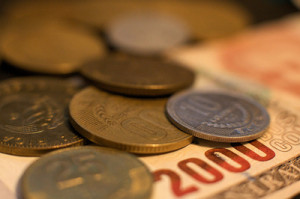 From Tuesday to Thursday, the Central Bank bought US$125 million of US dollars to maintain its exchange rate within a set band.

Bolaños said that Costa Rica was studying the experiences of other countries in Latin American such as Brazil, which has introduced measures in recent years to stop overseas investment from pushing up its currency.

“We’re looking at and considering (capital control) options, which of them have been good experiences and what are their weaknesses,” said Bolaños.

Low interest rates in advanced economies have encouraged investors to seek higher returns in emerging markets such as Costa Rica, where the benchmark interest rate is at 9.05 percent.

Bolaños declined to comment on the possibility of relaxing the exchange rate band and allowing Costa Rica’s currency to go below its current 500-colon floor.

But in a meeting on Thursday with Bolaños and the country’s vice president, Luis Liberman, the president of the Exporters’ Chamber, Monica Segnini, said that the possibility came up.

“It was discussed and we made our position very clear that letting the band go without controlling interest rates would kill industry,” Segnini said.

QCOSTARICA - Despite losing their home entirely in December, a Heredia received electricity bills from the Heredia Public Service Company (ESPH) for January and...
The Americas

Q REPORTS - U.S. President Joe Biden is expected to outline his vision of Washington's Latin America policy at the next Summit of the...
Vaccine

QCOSTARICA - A new batch of vaccines of 92,430 doses, and the largest received since December against covid-19, arrived Tuesday, as part of the...
Coronavirus

Japan is beefing up measures against loneliness, taking a first major step toward comprehensively tackling a pervasive problem in the nation that has again...
Entertainment

The filming of the second season of the reality show “ReverseD” on the Discovery Channel officially began last Sunday, February 21, in Atenas, in...
Political Economy

QCOSTARICA - The restrictions for travelers imposed by the United States, Canada, Mexico, France, Spain and the United Kingdom, six of the main sources...
HQ

QCOSTARICA - Costa Rica is on the verge its seventh consecutive week with a decrease in new cases of covid-19. Between Saturday (February 20)  and...
Banking

QCOSTARICA - Loans in dollars, which had a great boom in 2000, began to slow down since 2016 and today, despite the fact that...