Costa Rica, Denmark and Norway Have the Happiest and Most Loyal Workforces in the World

Q COSTA RICA  NEWS — What motivates young professionals the most to leave one employer for another? And why does talent in one country appear to be happier and more loyal that of its neighbor?

Global employer branding thought leader, Universum, has just completed one of its largest studies to date, and revevals that compared with the Nordics, Latin American countries including Chile, Colombia, Mexico, Panama and Peru show great levels of satisfaction at work but their loyalty levels suggest they will be likely to change employer in the next couple of years.

The exception to this is Costa Rica, which not only has a very happy workforce but employees who are likely to stay in their current jobs longer than the rest of their Latin American counterparts.

More than 200,000 young professionals in 57 markets participated in the survey for this research, which was carried out between September 2015 and September 2016. 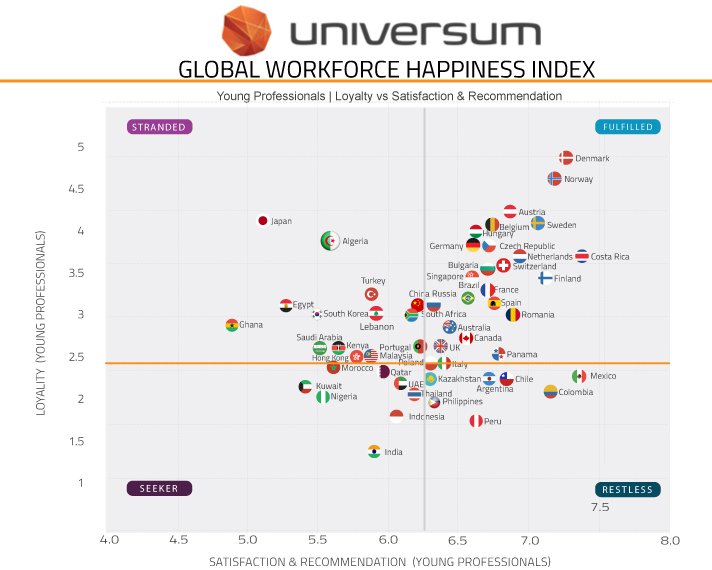 The top ten is dominated by countries from Western Europe and more specifically the Nordics, with Denmark’s workforce taking this year’s top spot, however in third place tucked between Norway and Sweden, is Costa Rica, this year third with the most happy and loyal workforce.

Why does it matter?
“Employee happiness is crucial for retaining good talent as well as having a motivated workforce that delivers great results and continuously innovates. If the young professionals in a market show low levels of discontent, this is a good sign for the economy as whole. However, it is at these times when it’s harder to obtain the best talent from your competitors.” said Universum Research Project Manager, Daniel Eckert.