Created by law, the “Riteve” vehicular inspection promotes safer vehicles on the roads. However, there are still drivers who are intent on cheating the system and without fear of being detected, at least one driver daily submits his or her vehicle to pass the inspection using some form of deception.

Altered mufflers, brakes and tires are the leading tricks used to pass a vehicle that would not otherwise do so. Others use violence, like intimidating inspectors with a firearm in plain view or having a vicious dog in the back seat.

Last year, the Riteve inspected a total of 1.1 million vehicles. Between January  and November 2013, 203.029 vehicles failed the test with for brakes, 320.332 for poor gas emissions test and another 90.329 with tires in poor condition.

The Riteve  inspections has resulted in a improvement of the condition of the vehicular fleet. While in 2003, 71% of the vehicles failed the inspection on the first try, ten years later, in 2013, it dropped to 48%. The reasons for the improvement includes newer vehicles on the road and better maintenance by owners.

The cheaters, according to Riteve officials, don’t take into account the risk to themselves and to others with a vehicle altered to pass inspection.

Jennifer Hidalgo, press officer at Riteve, says drivers don’t realize that inspectors are trained to detect the alterations. “What people do not understand is that heir ‘macgyver’ will not work anymore with us and will end up spending more”.

In Costa Rica, they call everything that is makeshift a macgyver.

Hidalgo says that inspectors have found excrement and animal waste inside the vehicles with the intent to avoid inspectors testing the interior items such as seat belts, horn, direction signals, window levers, etc.

Some drivers will be verbally abusive to inspectors, others threaten or become violent when an inspector detects a problem(s).

The Consejo de Seguridad Vial (Cosevi)  board last week approved regulations to with respect to the threats and weapons.  “Carrying weapons and threatening inspectors will be absolute prohibitions”, explains the deputy minister of Transport, Silvia Bolaños.

Carlos Rivas, legal director of Cosevi, says that regulations authorizes Riteve officials to refuse service in the event a driver does not meet basic rules of respect.

Another change is that is in the legislation is the requirement to present a driver’s license. Currently, the person submitting a vehicle for inspection has to only present a valid photo ID, like a cedula (Costa Rican identification) or a passport.

The following diagram, showing the ways drivers attempt to cheat Riteve,  is by La Nacion in its Sunday edition. 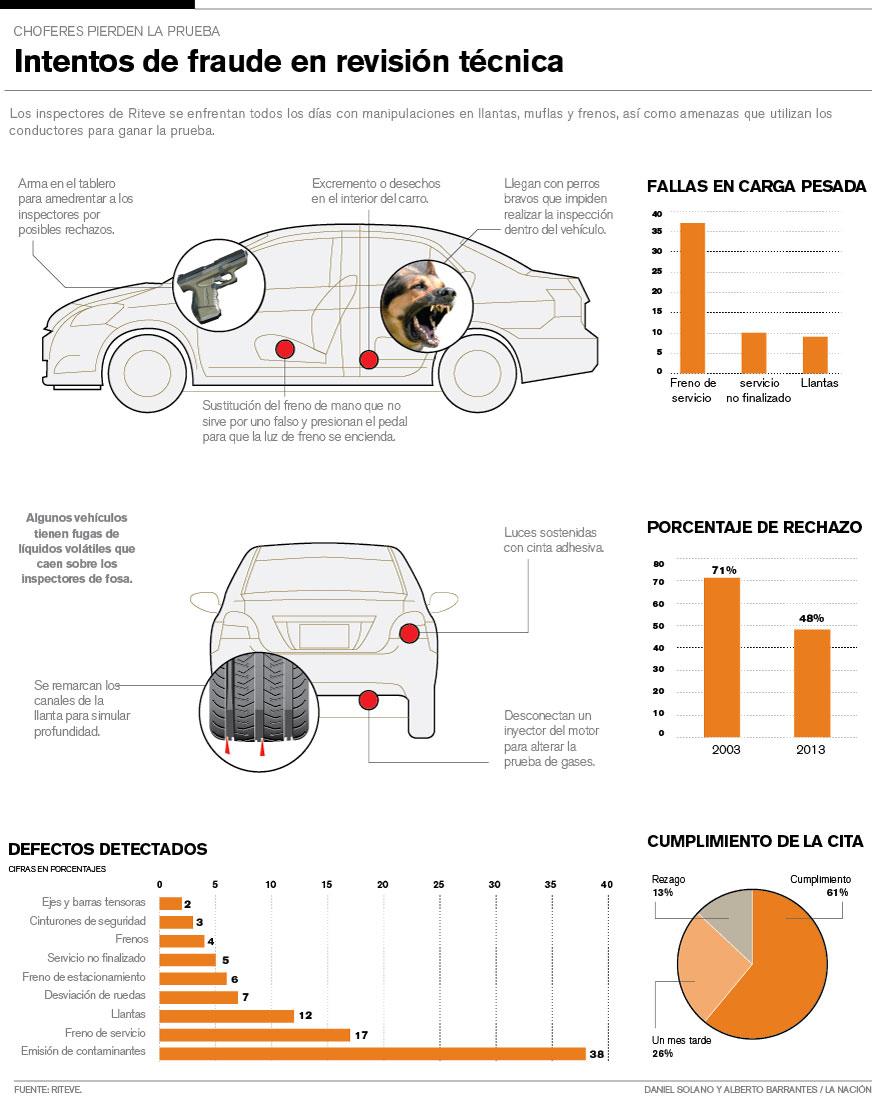