Costa Rica eco tour: wild for the delights of a natural paradise 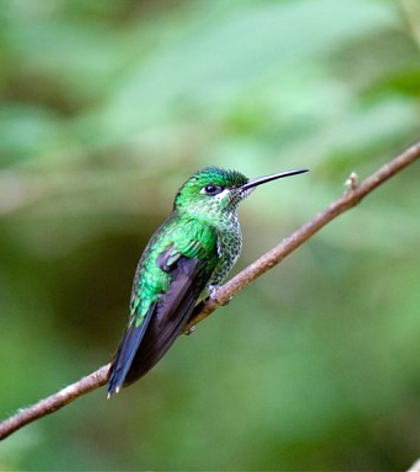 On an eco tour of Costa Rica, Pat Richardson uncovers a modern-day Eden bursting with sound and colour.

It wasn’t a scheduled stop, but once again our guides, Fabian and Jorge, had spotted something that they wanted us to see. 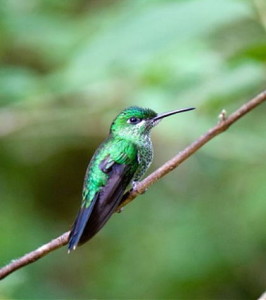 Armed, as always, with binoculars and cameras, we hurried back along the road to see this endangered species, of which around only 40 pairs remain.

With their vivid lime-green colouring, the birds were easy to spot in a not-too-distant tree. And when they took to the air, more of their glorious plumage was revealed: radiant blue wings, blue and scarlet tailfeathers and flashes of bright sulphur-yellow.

Fabian and Jorge proved to have a remarkable ability to spot wildlife amid the dense vegetation of this lush land. They pointed out slumbering sloths — one clutching her baby — as well as spider and capuchin monkeys, toucans, part-submerged caimans, a water snake, walk-on-water lizards, geckos and numerous iguanas. And what, from a distance, looked to us like a stray stem of ivy trailing its long line of leaves down a tree trunk turned out via a closer look through binoculars to be a colony of little-nosed bats, sleeping off the daylight hours in single file.

Equally exciting were the creatures we could see or hear for ourselves. We could soon distinguish iguanas from the branches on which they languished; we knew when howler monkeys were near because their haunting roars reverberated through the forest; and we spotted tiny, brightly coloured tree frogs in the garden of our hotel in Tortuguero National Park.

Its name means “land of the turtles” and no one on the beach could miss the dozens of tiny hatchlings, which, discarding the shells from which they had just emerged, set off determinedly into the pounding surf on their remarkable, annual odyssey.

Just as thrilling, a few days later, was having wild hummingbirds perch on my fingers as they sipped sugared water from a feeder. More than 50 varieties of these flying jewels can be seen in Costa Rica, and no two on my hands were the same.

The wildlife we saw on that evening’s “night safari” was equally exotic but less enchanting — apart, that is, from the family of racoons that stopped for a drink in the grounds of the lodge we set out from. As our guide’s torch-beam picked out, in turn, a tarantula, a tightly coiled green serpent and a poisonous toad, we felt more unnerved by these sights than we would have in broad daylight and were left wondering what else lurked concealed by the inky night. Even so, it was yet another unforgettable experience.

Although bird and animal sightings were frequent, they weren’t the only highlights on this eco adventure: an eight-day journey that took us east from the capital, San José, to Tortuguero National Park — accessible only by small plane or, in our case, by boat through the rainforest — and the Caribbean coast. We then travelled west past a volcano, on through fertile valleys blessed with volcanic soil, up into an ethereally beautiful cloud forest, and across a plain to the Pacific coast for a three-day beach extension, spending seven nights in hotels en route.

At its widest point, Costa Rica measures a little more than 160 miles, and for a country that’s only half the size of Cuba, it packs in some very varied terrain — four-fifths of it mountainous.

The rainforest certainly lived up to its name and was a pleasure to explore by boat (ponchos provided). Costa Rica sits firmly in the tropics, so wet days were not cold ones and nights were warmer when the skies were not clear and the day’s heat lingered, trapped by clouds.

Halfway through the trip we headed from our hotel at the foot of Arenal (pictured below, the country’s most active volcano) for Tabacón Springs, a thermal spa resort built around a series of naturally occurring hot pools and cascades. We got thoroughly soaked — and it was blissful.

Another optional excursion that involved getting wet was white-water rafting, which I signed up for, having enjoyed some sedate float-boat rides in the past. This experience was altogether different: kitted out with helmets, life-jackets and paddles, and drilled in self-preservation in case we should fall overboard, we were swept into a raging torrent, bumped over a series of hair-raising rapids and bounced off the opposite bank. Exhilarating, but far from sedate.

The majestic Monteverde Cloud Forest, which sits high on the country’s mountainous backbone, over which moist air from the Caribbean meets dry air from the Pacific, also lived up to its name. Not that it was enveloped in broken cloud — rather, we witnessed a slow but ceaseless sequence in which slender veils of vapour rippled sinuously, often parting so we could see the Pacific Ocean, which sparkled invitingly far below.

Our walk through the Cloud Forest Reserve revealed a very different world from the one we had viewed from our boat trips through the rainforest, but this country is all about contrast. Our Sky Walk, from which we looked down on the canopy we had just been looking up at, provided another one, as did a very informative coffee plantation tour and, later, our three lazy days in a lively beach resort.

Despite all its beauty, the paradox of Costa Rica is this: poor infrastructure is its Achilles’ heel. Roads are inadequate, many bridges have structural problems and its ports and airports cry out for improvement. Most of the money required to make all this work will come from large-scale tourism — but this lush and friendly country’s unique charm is that the masses don’t yet go there.