One point? No problem. Coach Pinto says the Ticos will somehow get the 3 points as Costa Rica gets first hex win, 2-0 over Jamaica 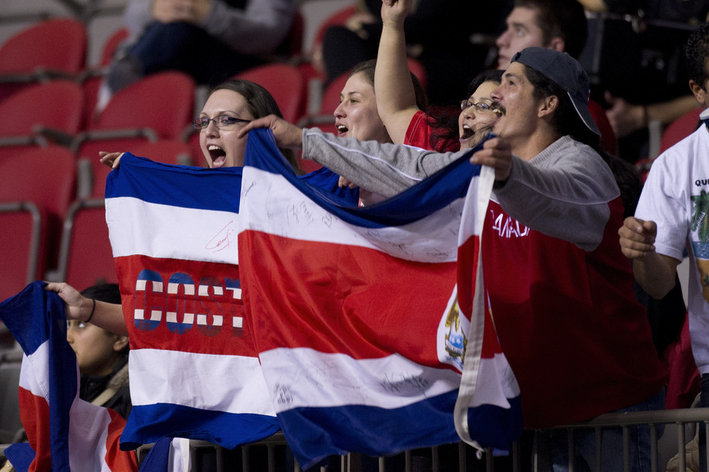 Following last Friday’s loss to the US, Costa Rica’s national soccer team, La Sele, recovered from their wintry ordeal with a relatively comfortable 2-0 win against Jamaica.

The win put the Ticos back in the mix for CONCACAF World Cup qualifying, in a game that must have seen most Costa Ricas glued to their television sets for the 90 minutes of play.

Both sides nearly went ahead early, with Jermaine Beckford shooting wide four minutes in when Jamaica looked certain to open the scoring before, at the other end of the pitch, Reading defender Adrian Mariappa’s attempted clearance came within a couple of inches of going into his own goal. The visitors started brighter, but Costa Rica, for their part, looked thrilled to be playing on grass rather than in a blizzard — and it was the hosts who took the lead in the 23rd minute.

It was a set piece that opened up the Jamaica defence, with Alvaro Saborio bringing the ball down and playing in a deflected pass for Umaña, who took a touch and smashed a shot past Donovan Ricketts to make it 1-0. The visitors’ response was to allow Costa Rica to keep attacking for most of the half, although Luton Shelton should probably have equalised just before the break when he danced through the Ticos defence only to delay shooting and let them clear to safety.

Most of the second half was intense, if nothing else — there was a major battle going on in the middle of the pitch — but something always seemed to go wrong. A touch, a misplaced pass, a wayward finish always ensured that even the most incisive-looking move broke down. The best example came in the 77th minute, when Joel Cambell sucked the Jamaican defence (and Ricketts) to one side and squared for Saborio five yards in front of the goal only for the striker to completely miskick his effort and send the ball bobbling well wide.

Fortunately, Diego Calvo opted to take matters into his own hands and inject a moment of real quality into the match. Picking up the ball at the edge of the area, the substitute danced away from Jermaine Taylor’s challenge, drifted further in and sent a beautiful curling shot just inside the far post. With 81 minutes gone, it was 2-0, and the points were safe.

Following January Camp in Qatar, the USMNT will kick off 2020 vs. Costa Rica on Feb. 1 in California

The United States Men’s National Team (USMNT) will get a chance...
Read more

Today, Wednesday, June 16, vehicles with plates ending 5 & 6 CANNOT circulate The measure is countrywide and applied between 5:00 am and 9:00 pm,...
Coronavirus

(DW) Jon works for the local government in the US state of Virginia. The 40-year-old received both his COVID shots in April. Most of...
Infrastructure