In handcuffs and on a United Airlines flight, the 27 year old Russaion national detained in Costa Rica, linked to what is being called the largest money laundering case, Maxim Chukharev, on Thursday headed back to the United States.

Chukharev was being held at the San Sebastian detention centre in San José, wanted by the United States for his role in the “laundering” of more than US$6 billion dollars attributed to Liberty Reserve.

Earlier this week Chukharev had prison guards scrambling when he was found, using dental floss and sewring needle, trying to sew his mouth shut in protest against his being deported to the United States. Later in the day he gran to cut his abdomen. Guards had to once again intervene.

Speaking to the Diario Extra, Chukharev said “It’s a form of protest to make the Constitutional Court aware of the irregularities, how (Costa Rican) authorities are driven by pressure from the U.S. government”.

Chukharev’s parents, Igor and Dina and the Russian Ambassador to Costa Rica, Alexander Dogadin, gave him a send off from Costa Rica at the Juan Santamaria international airport Thursday morning.

The Chukharevs describe his son’s involvement as only “a network technician working for a company that provided technical support to many companies, including Liberty Reserve, but has nothing to do with anything”. (Nov 2013 interview with CRHoy)

Chukharev and seven current and former employees of Liberty Reserve were charged in the U.S. at a Manhattan court hearing on May 28, 2013. Liberty Reserve account manager Azzeddine El Amine is expected to be extradited to the U.S. from Spain. U.S. Attorney Serrin Turner said the U.S. government is also working on securing the extradition of a third defendant, Liberty Reserve principal founder Arthur Budovsky, who was initially arrested in Spain.

U.S. Federal prosecutors have alleged the Costa Rica based Liberty Reserve provided real-time digital currency transactions that shielded the identities of users, making the site an ideal tool for criminal operations looking to launder their profits and buy and sell illicit products and services. 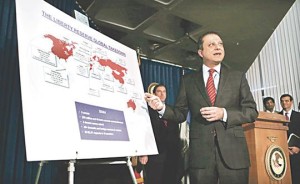 “As alleged, the only liberty that Liberty Reserve gave many of its users was the freedom to commit crimes,” Manhattan U.S. Attorney Preet Bharara said when the charges were first announced. “The coin of its realm was anonymity, and it became a popular hub for fraudsters, hackers and traffickers.”

Kats and Marmilev were arrested in Brooklyn. Kats pled guilty Oct. 31, 2013, while Marmilev has pled not guilty.  Jimenez and Abdelghani have not been arrested and remain at large.

Budovsky established Liberty Reserve in 2006 after he and Kats were convicted of violating money laundering laws while operating a previous venture, known as Gold Age Inc., according to prosecutors.

Liberty Reserve grew to have more than 1 million users — including more than 200,000 in the U.S. — who conducted around 55 million transactions, the government alleged. Among those transactions, criminals laundered around US$6 billion, according to the May 28 indictment.

Liberty Reserve did not require users to validate their identities, allowing them to open accounts using fictitious or anonymous identities, according to prosecutors. A law enforcement official working undercover was able to start a Liberty Reserve account under the name “Joe Bogus” with the address “123 Fake Main Street” in “Completely Made Up City, New York,” the government contended.

- Advertisement -
Paying the bills
Previous articleFather Says He Is Living in Anguish and Despair Over His Son’s Death
Next articleQuintavalle Dead!