(QCOSTARICA) Agents of the Organismo de Investigacion Judicial (OIJ) where surprised, in what appeared to be a humble house in Barreal de Heredia, they found sophisticated computer equipment used by 24-year-old Costa Rican, identified by his last name Rivera Sánchez, wanted by the Federal Bureau of Investigation (FBI).

The man is alleged to be linked to an international network of hackers with activity in the forum known as “Darkode” among criminals, the forum was a secretive, password protected society of elite hackers.

In a press release, the OIJ said the FBI had requested at least 30 similar raids around the world. The FBI reported that some 19 raids have so far been carried out and the detention of at least 70 people.

In Costa Rica. According to the investigation by the OIJ, Rivera Sánchez maintained a virtual server on the internet, running malicious programs.

Apparently, he is also being linked to the administration of a Bootnet (also known as zombie army), although their owners are unaware of it,  used to capture passwords, personal data, spread viruses, commit online fraud and manipulate web pages.

The OIJ says it seized computers, electronic storage equipment and other evidence that is being analyzed by national and international agencies.

Rivera Sánchez, a computer sciences student at the Universidad Nacional (UNA), was released without precautionary measures (ie signing in to police) since  he has no record and no chance of attempting to obstruct the investigation, because all the computer equipment that were allegedly used to commit the crime were seized, according to the Fiscalia (prosecutor’s office). 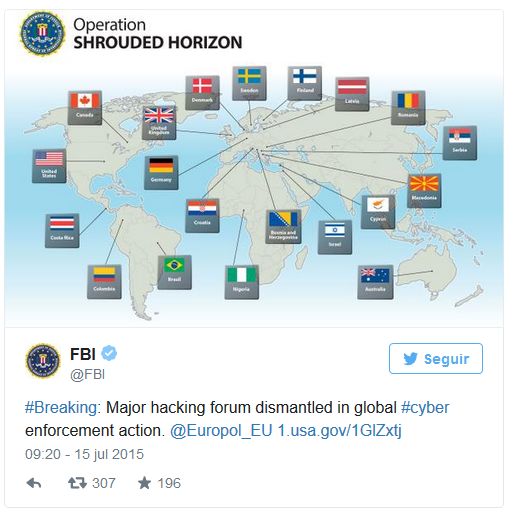 The Pittsburgh Post-Gazette explains how the investigation started:

The FBI worked with law enforcement agencies in 20 countries to investigate, search and arrest some 70 members and associates of Darkode around the world, as part of the multi-national ‘Operation Shrouded Horizon.’ According to the DOJ, it was the largest coordinated international law enforcement effort ever directed at a cyber-criminal forum.

“This is a milestone in our efforts to shut down criminals’ ability to buy, sell, and trade malware, botnets and personally identifiable information used to steal from U.S. citizens and individuals around the world,” FBI Deputy Director Mark Giuliano said. “Cyber criminals should not have a safe haven to shop for the tools of their trade and Operation Shrouded Horizon shows we will do all we can to disrupt their unlawful activities.”

U.S. Federal officials say the investigation into Darkode is continuing.

Q24N - Arriving in the Guatemalan capital about two hours late, after the plane in which she was traveling had to turn around due...
Latin America

Q REPORTS (Council on Foreign Affairs) Democracy is being destroyed in Nicaragua. This has been the long-term project of Daniel Ortega, the country’s dictator,...
Disasters