Costa Rica Headed To Florida For Frendlies Ahead of World Cup

Costa Rica’s national soccer team is headed north to the United States, playing a couple of warm up games before the 2014 World Cup in Brazil, June 12 to July 13. 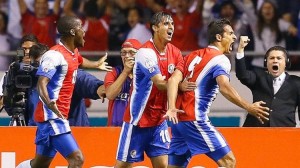 The games will be played at the Florida’s Raymond James Stadium, home to National Football League’s Tampa Bay Buccaneers. June 2 is with Japan and June 6 with Zambia.

Alberto Zaccheroni, coach of the Japanese team, told the Kyodo news agency, “I chose Florida as the team needs to acclimatize to the heat and hunmity of Brazil while minimizing travel…Florida made for the ideal destination”. Japan will paly Cyprus at home in Saitama on May 27 before travelling to the United States.

For the Ticos, the weather in Florida is pretty much the same as in Costa Rica all year round.