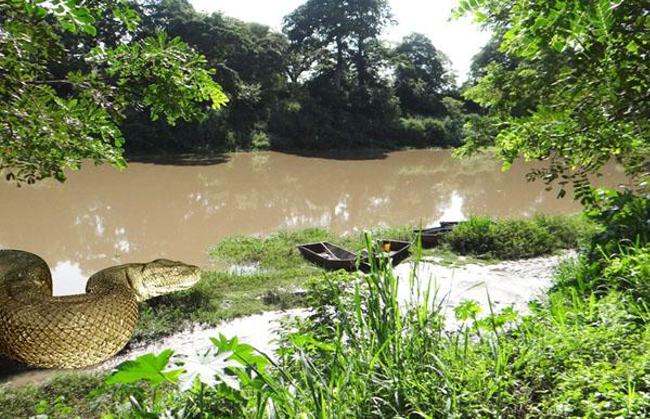 If you live near the banks of the Tempisque River in Guanacaste, you may want to keep an eye on your livestock, as well as your dogs and cats. An anaconda slithered away from its unnatural farm habitat, where it was kept as an exotic pet by an owner described by neighbors as “a powerful gringo” in Costa Rica.

The 12-metre long anaconda is not native to Costa Rica, and it has residents from rural towns along the large Tempisque River in deep fear. According to a news report in tabloid newspaper Diario Extra, neighbors from the towns of La Guinea to Paso Tempisque have reported sighting the animal feasting on small caymans (Caiman sclerops), and there are rumors of missing cows -although they have been unsubstantiated since one of those cows has already turned up.

La Guinea is part of the Nicoya Archeological Region, and in the past it has been the site of important digs by anthropologists and archeologists. The fact that an anaconda is running loose in this community is a sign of a growing problem in Costa Rica: The exotic pet trade.

The Hunt is On

The Ministry of the Environment (Spanish acronym: MINAE) has organized a hunt for the loose anaconda. Public officials from the local conservation area are also investigating reports of yet another exotic pet owner in the area who may be keeping an anaconda in his or her property. With regard to the escaped anaconda, Diario Extra has reported that this large reptile was kept in a cage by an owner who is an expat from the United States. A farmhand tasked with feeding the snake, which was brought from Brazil, got spooked while carrying out his duties; the ophidian apparently could not resist the call of the Tempisque River.

A good portion of the area where the anaconda might be is protected by government conservation officials who are concerned that it might be feasting on deer and jaguars. These two species are already threatened by the loss of habitat they experienced for many decades before conservation and reforestation took hold in Costa Rica.

Meanwhile, wildlife rescue centers such as Zoo Ave in La Garita, province of Alajuela, are on alert. Officials at this premier rescue center are concerned because the non-native anaconda, which feeds about twice a month, might be confused due to living in captivity. The Tempisque River and its forest surroundings, however, are optimal habitats for this reptile.

Costa Rica has been known as a prime destination for exotic pet smugglers; in fact, many have been caught trying to surreptitiously sneak wildlife out of the country. In the late 20th century, U.S. Customs agents dismantled an international exotic bird smuggling ring based in several southern states that focused on Central American nations such as Belize, Costa Rica, Honduras, and Panama.

Earlier this year, renowned herpetologist Bill Lamar was charged for making the Samuel L. Jackson film Snakes on a Plane come to life when he smuggled seven snakes in his jacket while flying from Peru to the busy Dallas-Fort Worth International Airport. Mr. Lamar is respected among herpetology circles in Costa Rica. In the past, the Costa Rica Star has reported on would-be smugglers caught transporting iguanas.

Exotic pet keeping is a phenomenon that tends to increase along with prosperity and the prevalence of drug trafficking, two elements that are currently active in Costa Rica. Importing exotic non-native wildlife is not only dangerous -it is also illegal. In 2002, a man told a U.S. Customs agent in Los Angeles that he had monkeys in his pants to declare. A search of the man revealed two pygmy slow loris (Nycticebus pygmaeus) babies. The man’s ultimate destination? Costa Rica; he claimed to have rescued the primates in their natural habitat near Laos for the purpose of placing them in a rescue center in our country.

Needless to say, taking wildlife out of its natural habitat is irresponsible and can be harmful to Costa Rica’s precious ecosystems. Trafficking in wildlife species is a criminal act, although it rarely leads to prison time for non-violent perpetrators in Costa Rica.