Costa Rica In World Top Ten For Laughter and Tears

QCOSTARICA – Latin Americans, with their fiery temperaments and spirit of joie de vivre,  dominated the list of top countries in a new Gallup poll which surveyed citizens in 148 nations around the globe, with Ecuador, Nicaragua, Guatemala, Colombia and Costa Rica all making the top ten for laughter and tears.

The survey, conducted throughout 2014, measured emotions by asking 1,000 people in each country whether they had experienced any of five positive and five negative emotions a lot the previous day. 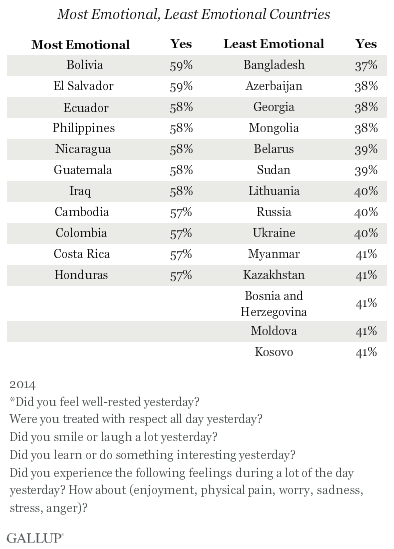 The five positive experiences were: feeling well-rested; being treated with respect; enjoyment; smiling and laughing a lot; and learning or doing something interesting.

Bolivia and El Salvador came out on top, with 59% of their hot-blooded respondents admitting that they felt some or all of those emotions a great deal the day before.

The only Southeast Asian people that merited a place in the top ten for pleasure and pain were the sensitive Cambodians, with a 57% rating.

On the other end of the scale – the most stoic, impassive and unexcitable people on the planet are apparently the Bangladeshis, with just 37 out of every 100 persons polled confessing to any form of passion on the day prior to questioning.

Burma was not far ahead: according to the pollsters, just 41% of those questioned confessed to anything as exciting as anger, sadness, respect or glee on that given day.

While Latinos were hands down the most sentimental, the least emotional people were generally assessed to be from Eastern Europe and Central Asia, such as Russians and Azerbaijanis.

But one thing’s likely – that Burmese, Bangladeshis and their cool-blooded kin will shrug off the Least Emotional tag with a shrug of indifference.

- Advertisement -
Paying the bills
Previous articleGas Prices Go Up. Gas Prices Come Down.
Next articleSylvester Stallone: Next Hollywood Star To Touch Down in Colombia