Costa Rica, the highest rated country in America for freedom of expression and human rights, constitutes an exception in a region corroded by corruption, insecurity and daily violence against the press.

QCOSTARICA – Costa Rica is first in America and fifth in the World in terms of freedom of the press indicates the Data of press freedom ranking 2021 annual report by Reporters Sans Frontières (RSF) – Reporters Without Borders. 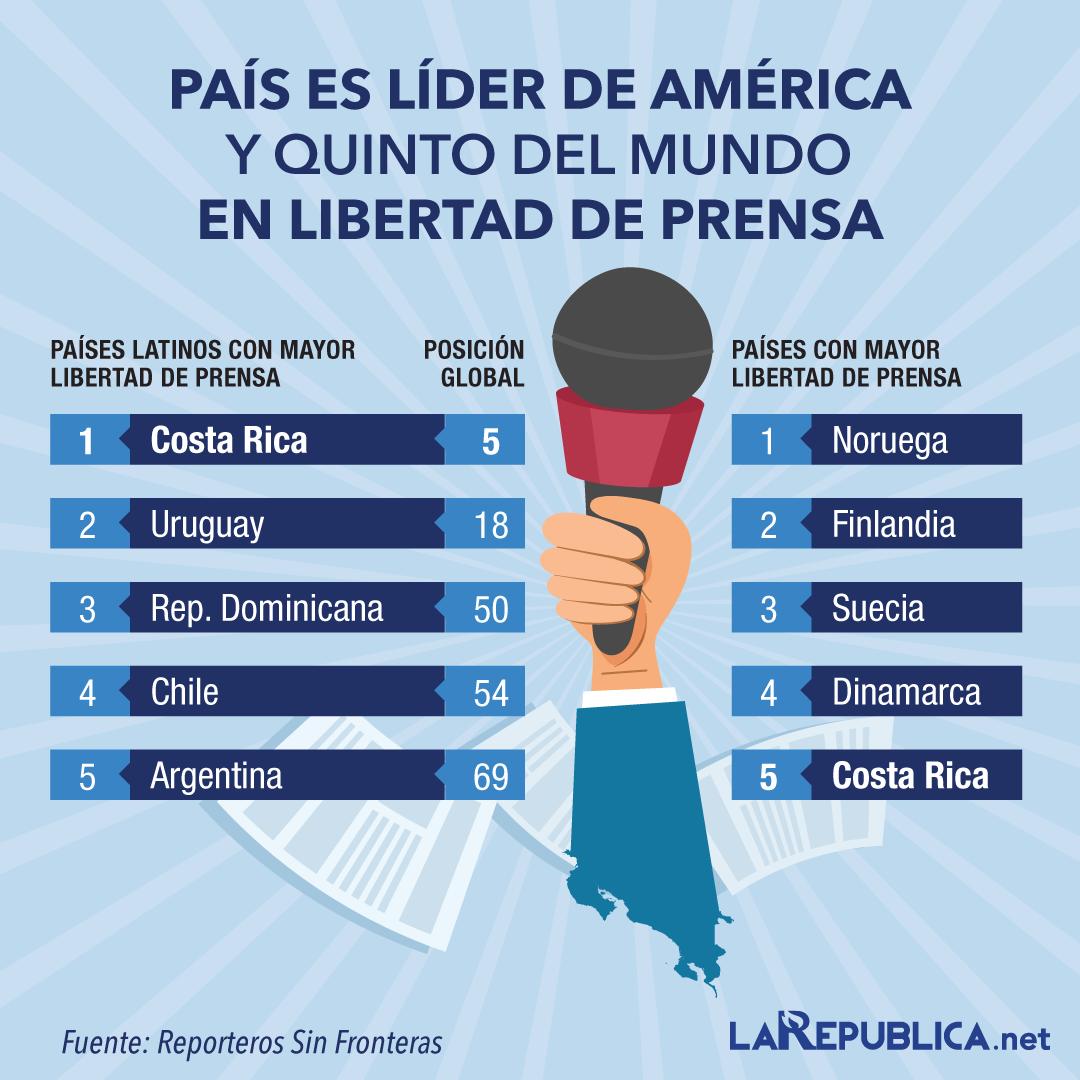 “Costa Rica, the highest rated country in America for freedom of expression and human rights, constitutes an exception in a region corroded by corruption, insecurity and daily violence against the press. Journalists in the country can safely exercise their profession and have a solid legal framework regarding freedom of expression.

“The Latin American country with the best record on respecting human rights and freedom of expression, Costa Rica is a remarkable exception in a region characterized by corruption, violent crime and constant violence against the media. Journalists are free to work and progressive legislation regulates the freedom to inform.

“Cases of attacks, threats or other forms of intimidation of journalists are rare, as is state interference in the media’s work, even if access to state-held information is sometimes complicated. Ownership of Costa Rica’s media is nonetheless concentrated in very few hands, limiting media pluralism to a significant degree.

“Corruption, impunity, cyber-surveillance and government violence – violations of freedom of information take many different forms in this vast region. Mexican, Honduran, Colombian and Brazilian journalists sometimes pay with their lives for investigating drug trafficking or corruption. Cuban and Venezuelan journalists are under constant pressure from governments that use all possible means to censor independent media outlets. Journalists in the United States cannot freely cover stories linked to surveillance or espionage,” the report summarizes.

The Reporters Without Borders (RSF) 2021 World Press Freedom Index shows decline across the board in Latin America. With a few exceptions, the coronavirus crisis has exacerbated an already complex and hostile environment for journalists.

It also highlights that Costa Rica does not register murders of journalists or citizen journalists this year.

The world leader in press freedom is Norway, while Eritrea, a northeast African country on the Red Sea coast, is last among 180 countries analyzed.

The RSF index assesses factors such as freedom in the exercise of the profession, censorship, or violent acts, finding that journalism is totally or partially blocked in 73% of the countries.

The top 5 countries with greater freedom of the press:

The United States and Canada rank 44th and 14th globally.

The College of Journalists of Costa Rica and the Institute of...
Read more

QCOSTARICA - Will the current wave of covid-19 infections cost Costa Rica's recovery of its already battered tourism? Will the wave of infections and scarcity...
Vaccine

QCOSTARICA - A new batch with 124,020 doses of the covid-19 vaccine landed Tuesday night, as part of the weekly deliveries from Pfizer. With this...
Health

QCOSTARICA - Sunday night, 432 of the 1,188 covid patients in hospital are in Intensive Care Units (ICU), after suffering complications from covid-19. In the...
Coronavirus

QCOSTARICA - Following a drop of new cases of covid-19 over the long weekend, the ugly head of the virus resurfaced on Wednesday with...
World