QCOSTARICA (NY Times) La Virgen, Costa Rica – Over just a few decades in the mid-20th century, this small country chopped down a majority of its ancient forests. But after a huge conservation push and a wave of forest regrowth, trees now blanket more than half of Costa Rica.

Far to the south, the Amazon forest was once being quickly cleared to make way for farming, but Brazil has slowed the loss so much that it has done more than any other country to limit the emissions leading to global warming.

And on the other side of the world, in Indonesia, bold new promises have been made in the past few months to halt the rampant cutting of that country’s forests, backed by business interests with the clout to make it happen.

In the battle to limit the risks of climate change, it has been clear for decades that focusing on the world’s immense tropical forests — saving the ones that are left, and perhaps letting new ones grow — is the single most promising near-term strategy.

That is because of the large role that forests play in what is called the carbon cycle of the planet. Trees pull the main greenhouse gas, carbon dioxide, out of the air and lock the carbon away in their wood and in the soil beneath them. Destroying them, typically by burning, pumps much of the carbon back into the air, contributing to climate change.

Over time, humans have cut down or damaged at least three-quarters of the world’s forests, and that destruction has accounted for much of the excess carbon that is warming the planet.

But now, driven by a growing environmental movement in countries that are home to tropical forests, and by mounting pressure from Western consumers who care about sustainable practices, corporate and government leaders are making a fresh push to slow the cutting — and eventually to halt it. In addition, plans are being made by some of those same leaders to encourage forest regrowth on such a giant scale that it might actually pull a sizable fraction of human-released carbon dioxide out of the air and lock it into long-term storage.

With the recent signs of progress, long-wary environmental groups are permitting themselves a burst of optimism about the world’s forests.

“The public should take heart,” said Rolf Skar, who helps lead forest conservation work for the environmental group Greenpeace. “We are at a potentially historic moment where the world is starting to wake up to this issue, and to apply real solutions.”

Still, Greenpeace and other groups expect years of hard work as they try to hold business leaders and politicians accountable for the torrent of promises they have made lately. The momentum to slow or halt deforestation is fragile, for many reasons. And even though rich Western governments have hinted for years that they might be willing to spend tens of billions of dollars to help poor countries save their forests, they have allocated only a few billion dollars.

Around the world, trees are often cut down to make room for farming, and so the single biggest threat to forests remains the need to feed growing populations, particularly an expanding global middle class with the means to eat better. Saving forests, if it can be done, will require producing food much more intensively, on less land.

“For thousands of years, the march of civilization has been associated with converting natural ecosystems to crops that serve only man,” said Glenn Hurowitz, a managing director at Climate Advisers, a consultancy in Washington.

“What’s happening now is that we are trying to break that paradigm. If that succeeds, it’s going to be a major development in human history.”

Deep inside a Costa Rican rain forest, white-faced capuchin monkeys leapt through the tree tops. Nunbirds and toucans flew overhead, and a huge butterfly, flashing wings of an iridescent blue, fluttered through the air.

Ignoring the profusion of life around him, Bernal Paniagua Guerrero focused his gaze on a single 20-foot tree, placing a tape measure around the spindly trunk and calling a number out to his sister, Jeanette Paniagua Guerrero, who recorded it on a clipboard.

With that, the tree, a black manú just over two inches in diameter, entered the database of the world’s scientific knowledge. Its growth will be tracked year by year until it dies a natural death — or somebody decides to chop it down for the valuable, rot-resistant wood.

The Paniaguas and their co-worker, Enrique Salicette Nelson, work for an American scientist, Robin Chazdon, helping her chronicle a remarkable comeback. 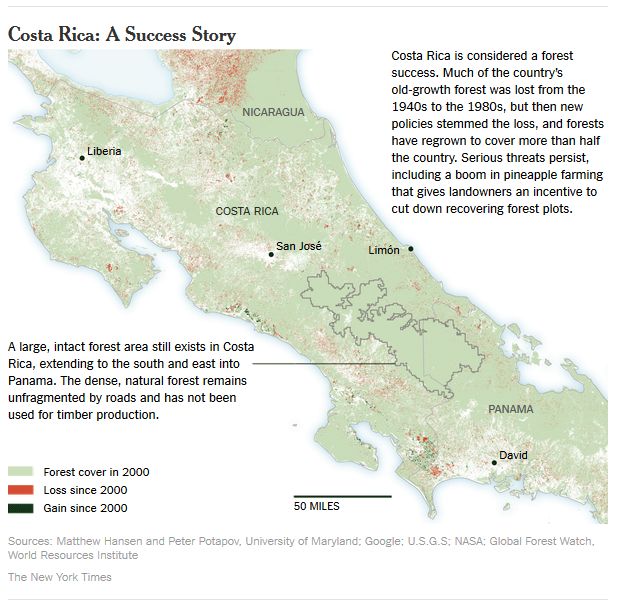 QCOSTARICA - Six months after the start of vaccination against covid-19, will it be time to open the campaign to those who want to...
Reports

QCOSTARICA - The President of Costa Rica, Carlos Alvarado, described the persecution of Nicaragua President Daniel Ortega against opponents as reprehensible after the government...
Disasters