What happens when a lottery prize, including the “gordo navideño” goes unclaimed? In Costa Rica, winners of the lottery have 60 days to claim their prize, after the Junta de Protección Social (JPS) – the state lottery corporation – divides the money among social programs. 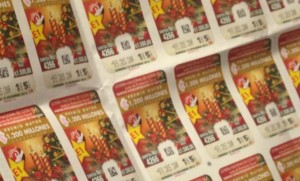 For the December 15 lottery, the JPS says that some ¢900 million colones in prize money has yet to be claimed. The last day is February 15.

According to Francisco Ibarra, manager of Production and Marketing at the JPS, so far winners have claimed prizes totalling ¢4.4 billioncolones.

The JPS confirmed that the winning jackpot tickets were sold in four emissions in Alajuela Centre, San Carlos, Orotina, Pavas, Catedral, Santa Ana and the Hospital district in San José.