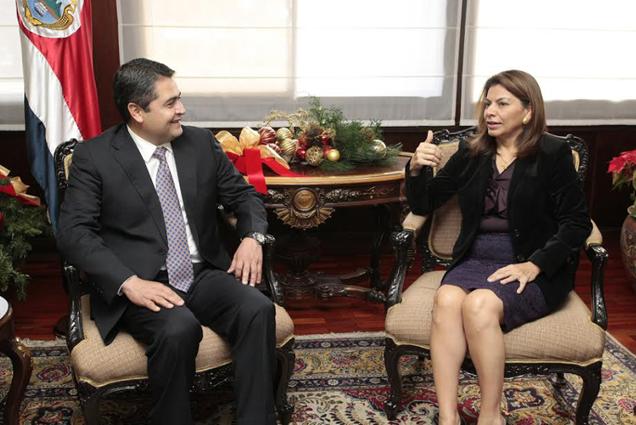 Presidenta Laura Chinchilla announced Wednesday that she will be attending the inauguration of president-elect of Honduras, Juan Orlando Hernandez, on January 27.

“Hernandez was kind enough to visit us and invite us personally to the power transfer during a brief meeting held at the Presidential House in San José, in December” she commented to journalists.

She said that her attending the ceremony in Honduras “is a gesture that is imperative in the name of the friendship and sisterhood among the nations that are closer to us.”

Chinchilla´s remarks come on the eve of the handing over to Costa Rica of the pro tempore presidency of the Community of Latin American and Caribbean States (CELAC) in the Summit of heads of State and Government to be held in Havana, Cuba, on January 28-29.

The meeting of the regional bloc is aimed at “strengthening political, economic, social and cultural integration among countries of this continent, and is expected to be attended by representatives of the 33 member countries, with more than 590 million inhabitants.

QCOSTARICA - After years of deterioration and antiquity, work...
Front Page