Q COSTA RICA NEWS – “He will be detained and immediately deported,” are the words of the Minister of Security, Gustavo Mata, on the possible presence Javier Duarte, the former governor of the Mexican state of Veracruz, reported to be in Costa Rica.

Mata made the comment following a report by a Mexican newspaper that Duarte, who took a leave of absence in October, is in Costa Rica.

The minister confirmed that the Mexican politician, if in fact he is in Costa Rica, did not enter legally.

Mexico’s El Economista said the fugitive former governor of one of Mexico’s most corrupt states is accused of diverting millions of public funds and money laundering, left Mexico in November. Duarte’s departure from Mexico was confirmed by his lawyer, Juan Carlos Cajigas, in a written statement to the press. 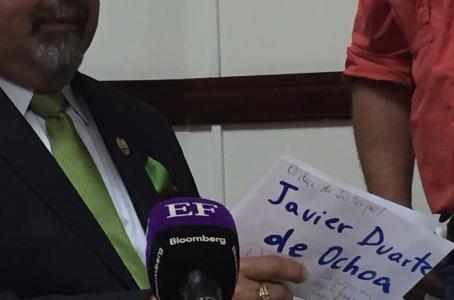 The paper added that Costa Rica authorities have already begun the search for Duarte based on their information.

“The presence of the Mexican former governor will not be permitted,” said Mata at the Friday press conference. “As authorities we want to stress in the strongest way that Costa Rica will not be a haven for criminals. If detected, he will be arrested and deported immediately. “

Mata said there in an exhaustive search for Duarte and called on the population to report to authorities any sighting of the former governor and that the properties of Benítez’s, that include hotels and residences in Cuidad Quesada (San Carlos), are also being searched.

So far, said the minister, there are no records that Duarte has legally entered Costa Rican territory, “but this does not imply that he has not entered with false documents.”

A review of the migration authority’s databases showed that the former president was in San José in October 2010, a visit that is also being analyzed to determine its motive.

Duarte, who was expelled from the ruling Institutional Revolutionary Party (PRI) after the probe into his alleged involvement in organized crime and money laundering, stood down shortly before the end of his six-year term.

His disappearance embarrassed Mexican President Enrique Pena Nieto, who took office vowing to get tough on corruption but has instead been accused by critics of allowing it to go unpunished.

The Attorney General of Mexico is offering a reward of 15 million pesos (about US$735,000 dollars) for information leading to the capture of Duarte.

QCOSTARICA - A Costa Rican tried to enter the country through...
Read more