COSTA RICA NEWS — Here we go again! The Costa Rican Foreign Ministry has filed a formal protest with the Nicaraguan government over the alleged logging of trees on the banks of the San Juan River close to the river island of Calero. This is the same area that has figured in the tense relations between the neighboring countries.

This is an extension of the back and forth series of charges and counter charges that have flown between the countries since 2010 when Nicaragua began dredging activities in the river. The river belongs to Nicaragua but the south bank is Costa Rica’s. Nicaragua rejected the protest. 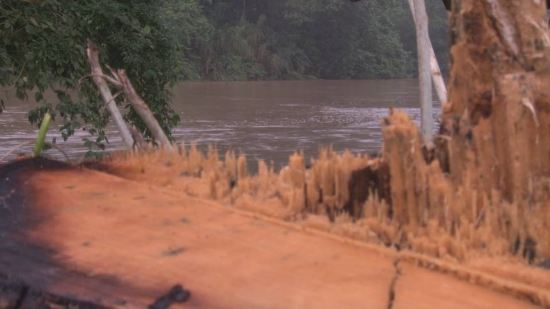 The Nicaraguan government of Daniel Ortega has apparently treated the entire Calero area as if it belonged to their country, even quartering troops on Calero as the dispute escalated in 2011. While maintaining relations, the two nations are firmly ignoring each other’s existence.

Even if the tree cutting was only “clean up” work, Costa Rican Foreign Minister Manuel Gonzalez said his ministry had not been consulted beforehand, by Nicaraguan Foreign Minister Samuel Santos and called that “inadmissable.” The protest may wind up part of Costa Rica’s case in the International Court of Justice.

But Foreign Minister Gonzalez admitted that his department had been unable to verify that the tree cutting was connected to the Nicaraguan government. All he knew was that trees had been cut in Costa Rican territory and the branches later hauled away in a boat.

But relations between countries can become like friction sores, tender so that even innocent movements immediately cause a reaction. Nicaragua has given plenty of reason for suspicion in the past with its cavalier attitude toward this country. Before 2010, the country might well have let the cutting go without comment

Environmental issue loom lard in Nicargua-Costa Rica relations since 2010. Indeed, cutting trees near a river is damaging because branches break the force of rain and roots absorb water, both of which slow down erosion that causes pollution and silting of the river.

QCOSTARICA - A moderate decline in new cases for the third consecutive week allowed the hospital system to avoid the dreaded collapse and rapid...
Reports

QCOSTARICA - Costa Rica will have a system called "Interceptor" that will eliminate floating and suspended waste from the upper layer of its waters,...
Reports

Q24N - El Salvador may be the first country to adopt bitcoin as legal tender, but recent developments suggest that it might not be...
Entertainment