Costa Rica will reveal the secrets of living a long and healthy life at the World Meeting of Blue Zones, starting today, Nov. 16, and through Saturday, Nov. 18, in Nicoya.

The secrets of longer living probably lie in the world’s Blue Zones, characterized by the long, healthy lifespan of its population.

In Guanacaste, on the Nicoya Peninsula, Costa Rica lies the world’s largest Blue Zone, where men and women exceed the average life expectancy with ages of more than 100 years.

And it is here that Costa Rica is hosting a World Meeting of Blue Zones to discuss the qualities determining the remarkable life expectancy of their community.

Part of the Nicoya Peninsula is added to the exclusive list of only five “Blue Zones” in the world, which includes: Icaria in Greece, Sardinia in Italy, Okinawa in Japan and Loma Linda in the United States. The Nicoya Peninsula Blue Zone in Latin America.

The World Meeting of Blue Zones will meet to thoroughly research what occurs in the zone, share the experiences of the long-lived individuals and learn more from the scientific, cultural and health points of view, without leaving aside the possibility of showing the tourist attractions on the Nicoya Peninsula. National and international guests will be present and there will be an activities agenda for visitors to enjoy.

According to studies done by the Costa Rican demographer, Dr. Luis Rosero from the Central American Center of Population (CCP) of the University of Costa Rica (UCR), the concentration of inhabitants older than 90 years old with a healthy lifespan on the Nicoya Peninsula is unique in the world, and the mortality rate of this population is 10% lower in comparison to other inhabitants of the similar age in the rest of the world. 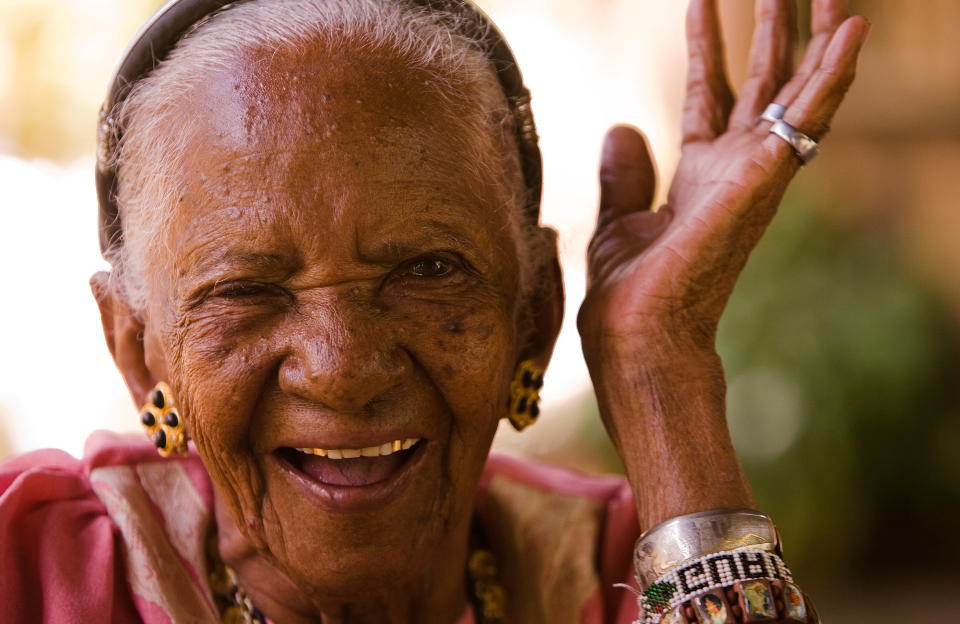 According to recent data, the nonagenarian population consists of 865 inhabitants and 41 long-lived individuals that have passed the goal of more than 100 years and nine people that will be one-hundred years old before November.

This means that Nicoya will continue to be painted blue for a long time.

So what is the secret to their success?

No stress. Nicoyans appear to have longer telomeres, essential elements at the end of chromosomes determining how human cells age. “Some scientists have argued that telomere length is a proxy for stress. And what we’ve found is people in Nicoya are less stressed and have been less stressed throughout their lives,” Gilbert Brenes of the UCR School of Statistics.

Hard drinking water. “Nicoyans specifically have water that percolates through the limestone and it’s very high in calcium and magnesium,” says Dan Buettner, author, and authority on Blue Zones. This extremely high calcium content could be responsible for lower rates of heart disease and stronger bones

Eat a light dinner. Most Nicoyans tend to eat lighter meals – particularly in the evenings. Their traditional diet is fortified maize (corn) and beans, which may be the best nutritional combination for longevity the world has ever known.

A good reason to live. The Nicoyans call it “Plan de Vida” (Life Plan) –  which propels a positive outlook among elders and helps keep them active. No matter how old they are, people in the community have a purpose and they take it seriously. But not too seriously – laughter is an important aspect of “Pura Vida”, a lifestyle choice celebrated nationally, encouraging everyone to smile.

Maintain social networks, focus on family. Nicoyan centenarians frequently visit with neighbors, and they tend to live with families and children or grandchildren who provide support, as well as a sense of purpose. Some might argue living in the pockets of in-laws could take years off your life, but it’s the sense of connection that is said to really hold this community together.

Keep hard at work. Centenarians seem to have enjoyed physical work of all their lives. They find joy in everyday physical chores.

Embrace a common history. Modern Nicoyan’s roots to the indigenous Chorotega and their traditions have enabled them to remain relatively free of stress.

QCOSTARICA - Strengthening trust is essential for the business...